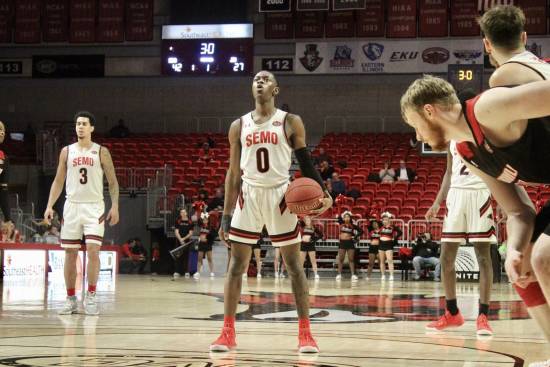 Sophomore guard Alex Caldwell takes a deep breath before a free throw against Jacksonville State on Feb. 7 at the Show Me Center.
Photo by Ramond Buck

SEMO Men’s basketball celebrated their first conference win with a 76-72 victory over Jacksonville State Feb. 7 at the Show Me Center.

The Redhawks entered the game with a 10-game losing streak and an 0-10 record in the Ohio Valley Conference. The energy from the Redhawks was high and they were ready to lay it all out on the court.

SEMO started off the game landing most of the rebounds and scoring consecutively on offense. This helped the Redhawks to lead 43-30 at the half.

Sophomore guard Alex Caldwell was on a scoring streak throughout the night. By the end of the first half, Caldwell hit two three-pointers and scored 12 points and six assists.

Caldwell put up 17 points in the game before fouling out with less than four minutes left in the second half.

“This win will bring us together as a team, it means a lot and it’s been a while,” Caldwell said.

This is Caldwell’s second season with the Redhawks, and he leads the team in points, averaging 11.9 points per game.

Senior guard Skylar Hogan put up 16 points with seven rebounds, having the biggest impact on the game against the Gamecocks.

“We have had a great two days of practice,” Hogan said. “We’ve just been working, putting us all on the same page. From this game, we have to learn to take care of the ball better and keep our composure.”

The Redhawks now have their first conference win of the season with seven games left.

“This win means a lot to the team. A couple of weeks ago, we went into overtime with Murray State, the top team in the conference. We can see it, we’re there,” said Hogan.

The Redhawks will return to the Show Me Center at 4 p.m. Saturday, Feb. 8 against Tennessee Tech.