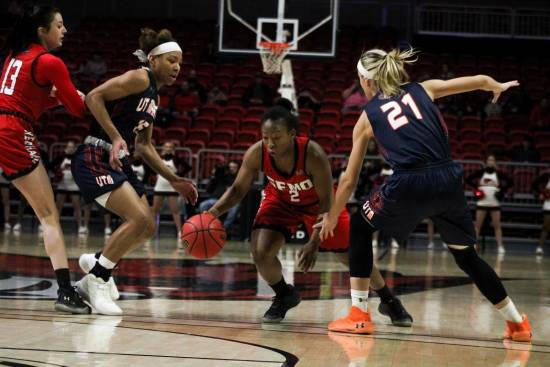 Senior guard Carrie Shephard dribbles through a double-team against UT Martin on Feb. 13 at the Show Me Center.
Photo by Ramond Buck

The Redhawks breakout third quarter led to a 71-69 victory over the University of Tennessee-Martin Skyhawks for their tenth straight win.

The game was close throughout, with the largest lead being 11 by the Redhawks. Which came with 6:29 left in the fourth. At the end of the first half the Skyhawks held a 32-28 lead. The Redhawks wouldn’t take the lead until Carrie Shephard made a 3 pointer with 2:42 left in the third to give the Redhawks a 44-42 lead.

“Carrie hit a shot, and then Jocelyn got a steal. That just got our momentum going and got the fans into it. At first, we were kind of deflated and then we started going on a run. Then it was back to SEMO basketball. This is what we do,” said junior guard Tesia Thompson.

Once Shephard hit the three to take the lead it was a new ball game. The Redhawks outscored UT Martin 22-13 in the third quarter bringing the score to 50-44.

Though the Redhawks were able to overcome UT Martin, Southeast coach Rekha Patterson was not completely satisfied with the performance.

“I’m trying not to be stubborn right now and immature because of how the game ended,” Thompson said. “We beat a really good basketball team. We showed a whole lot of toughness, fight, and determination. I am really proud of that, but all I can see is her with that last shot and having a great chance of going in.”

Thompson was speaking about Chelsey Perry who took the last shot for the Skyhawks. Perry went 13-29 for 36 points.

“I would say she’s grown a lot. She is a good player, but I don’t feel any pressure regarding other players. I trust my defense,” Thompson said.

Even though the Redhawks were able to build an 11-point lead, poor free throw shooting allowed UT Martin to get back into the game. The Redhawks went 19-31 from the free throw line.

“I guess the good news is in everything there is a lesson. We can go back and fix all of our mistakes,” Thompson said. “That part is good, it’s not like we played it perfect and that happened.”

The Redhawks are now 19-5 (11-2 OVC) and take on Southern Illinois University-Edwardsville on Saturday, Feb. 15, at the Show Me Center.