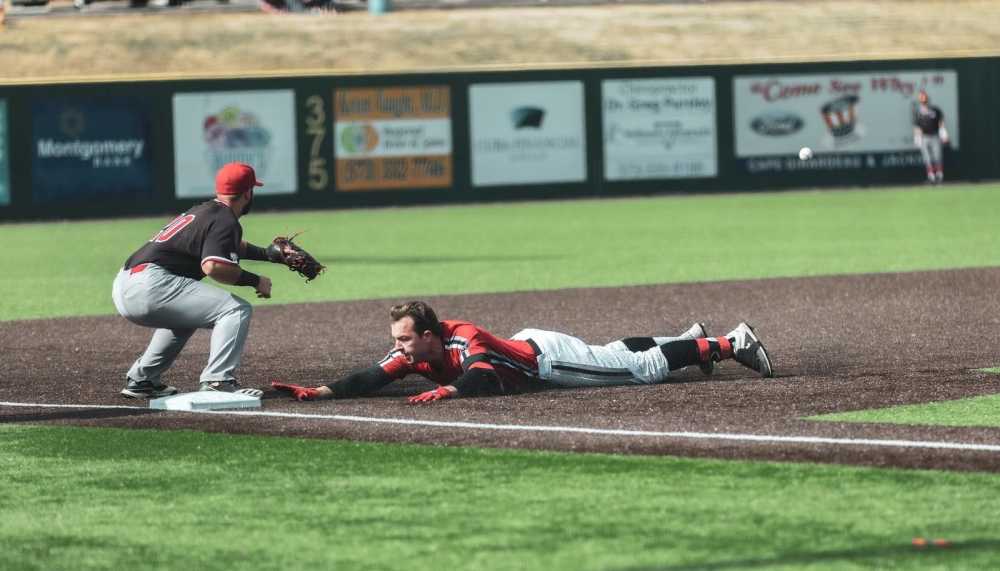 Tyler Wilber slides into third base after his big hit in game 1 of the Redhawks double-header on Saturday, Feb. 22.
Photo by Jan Salmon

Redhawks baseball wrapped up their first home series of the season at Capaha Field as their record now stands at 2-6 after losing the series 3-1 to Northern Illinois University.

The series between the teams began on Friday, Feb. 21 and finished up on Sunday, Feb. 23.

Southeast’s sole win came in a doubleheader on Saturday, Feb. 22, in extra innings as the Redhawks pulled out a 15-14 win in ten innings.

Sophomore catcher Andrew Keck was the deciding factor in the victory for Southeast. With the bases loaded and down by one in the bottom of the 10th inning he hit an infield single to break the tie and win the game.

The game was tied in the eighth inning due to a scoring surge by the Redhawks bringing in nine runs in the inning alone to tie the score at 15. Both senior utility-man Danny Wright and senior outfielder Justin Dirden smacked homers for Southeast during the stretch in the eighth.

The Redhawks would split the doubleheader, losing the first game 7-5 after a back and forth five lead change game. This game saw four ties and it wasn’t decided until a seventh inning RBI from NIU senior third baseman Tommy Szczasny brought in the last two runs to finish the game.

In the home opening game, Southeast maintained a hold on the lead until the eighth inning where the Huskies scored five runs to put them ahead of the Redhawks 7-4. Southeast did strike first putting them up 4-2 in early innings. Pitching on both sides was strong allowing only nine hits per team on both sides for the game. Southeast senior pitcher Dylan Dodd had a strong performance on the day striking out eight and giving up only two runs before getting pulled in the sixth inning, freshman pitcher Blake Cineros took the loss giving up three runs and four hits.

In the final game of the four game series, the Huskies were able to capitalize on the mistakes by the Redhawks, scoring six unearned runs on four errors. In the bottom of the third, Justin Dirden hit a two-run homer putting the Redhawks up 4-3. NIU would then build their lead on unearned runs from errors, scoring two in the next inning and four in the ninth putting them in firm position of winning the game 11-5.

Southeast coach Andy Sawyers said that, “Games are close and well pitched on both ends, we just have to find a way to pull through and execute to finish off the game.”

Southeast will continue their homestand as they take on Ohio University (3-4) in another four game series starting on Friday, Feb.28.