The gentle art at Southeast 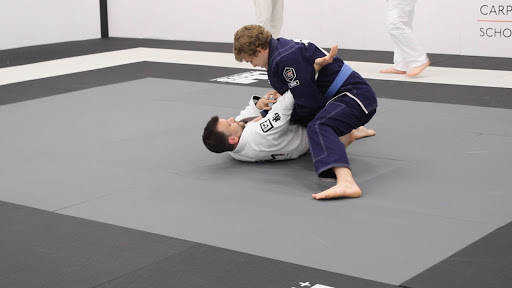 Preston Holifield and instructor John Dudley work on an arm bar technique during class at the Carpe Momentum School of Jiu Jitsu on February 19th.
Photo by Kyle Skibinski

The sequence started when Person A threw two punches: a right then a left. Then, Person B blocked those punches and wrapped up Person A in a bear hug and tossed him over the top of their body. There was a loud thud when Person A hit the ground.

Immediately, Person B goes on the offensive; he is looking for any advantage he can get. Eventually, Person B applies a choke and Person A is forced to tap out.

These were the scenes from inside the Carpe Momentum School of Jiu Jitsu right here in Cape Girardeau.

“Brazilian jiu jitsu is a form of martial art that focuses on subduing your opponent in a humble and respective way while still protecting yourself,” said Preston Holifield, Southeast student and jiu jitsu practitioner.

Before the grappling started, the fighters squaring off would give one another a high-five and a fist bump. They would also do the same every time someone tapped out before they began sparring again.

“Jiu jitsu is called the gentle art,” Holifield said. “It’s about more than just beating up on others. It’s about respect and compassion for the people around you. We’d really like to share all that we have to offer with anyone who is willing to try.”

Holifield has a wrestling background and originally got into jiu jitsu as a way to stay in shape while keeping his skills sharp. However, Holifield said you don’t need any sort of experience to try the sport.

“We are open to all,” he said. “We’re going to walk you through everything, we make it so that it is fair, equal and safe for everyone. It’s a low-stress environment and a lot of fun.”

Holifield was actually in the process of starting a jiu jitsu club at Southeast this semester, but due to time constraints for him, he was not able to get the club formed.

He has not allowed the setback to stop him from training. He estimates he puts in 10 hours a week to jiu jitsu to go along with his work as a nursing student and in nursing clinics. He actually feels jiu jitsu helps him in that regard.

“If I’m having a tough day with nursing school, I think back on my jiu jitsu, and I’m like, ‘I’m a stinking blue belt, I spent three years earning this, what is this five-page essay I can’t knock out?’ or ‘What is this patient I can’t help?’” Holifield said. “If you can do jiu jitsu and earn your stripes, you can do anything.”

For now, there is no formal jiu jitsu presence at Southeast. But until there is, Holifield will continue to practice and spread teachings of the gentle art.