Slow first half plagues Southeast in loss to UT Martin 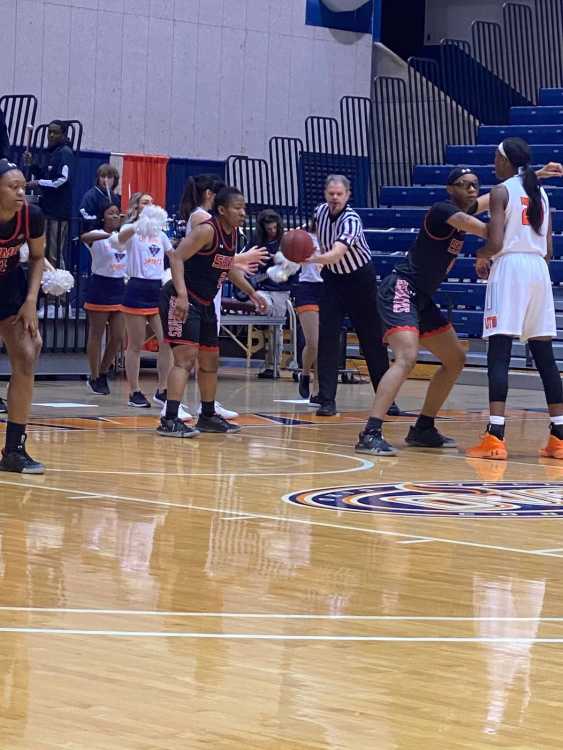 A slow first half offensively burned the Southeast women’s basketball team in its 78-72 loss to the University of Tennessee at Martin Skyhawks on Feb. 29.

The Redhawks were led by redshirt-senior guard Carrie Shephard who had 22 points on 8-for-20 shooting from the field, including 6-for-11 from the 3-point line.

Shephard said one of her focus points recently has been to just play her game.

“[I’m] not letting what I do on offense dictate my defense,” Shephard said. “I knew they were going to look to hedge a lot, so we got them out of that, and you gotta respect my shot, too. I might miss one, I might miss two, but I’m not gonna miss them all.”

“Her shooting in that first half was pretty amazing,” Patterson said. “I wanted her to take like five to six more shots.”

Shephard had 15 points on 5-for-9 shooting in the first half.

Patterson said the game plan was to try and hold the other four Skyhawk starters not named Chelsey Perry under double figures in scoring.

“If Chelsey [Perry] goes for [40 points] — which she’s capable of — she can get 40 but we can’t let the others get double figures,” Patterson said. “Unfortunately, [Maddie] Waldrop finished with 17.”

The Redhawks entered the fourth quarter trailing 61-53. Freshman guard Roshala Scott ignited the Southeast offense with five straight points in 40 seconds to give the Redhawks a 66-65 lead with 3:25 to play in regulation.

“Her energy gave us life,” Patterson said. “You need that sometimes when you’re on the road and it’s hard and you’re struggling. You need somebody to come in and give you that spark, and she was that tonight.”

The loss moved the Redhawks to 22-7 overall and 14-4 in the Ohio Valley Conference. The Redhawks finished the regular season as the No. 3 seed heading into the OVC tournament in Evansville, Indiana, which begins March 4 with the championship game being played on March 7.

The Redhawks play at 3 p.m. Thursday, March 5 against No. 6 Tennessee Tech Golden Eagles.

Patterson said her team will have to continue playing hard and as a team.

“We’re gonna have to take care of the basketball, play team D, rebound, and then make our free throws,” Patterson said.