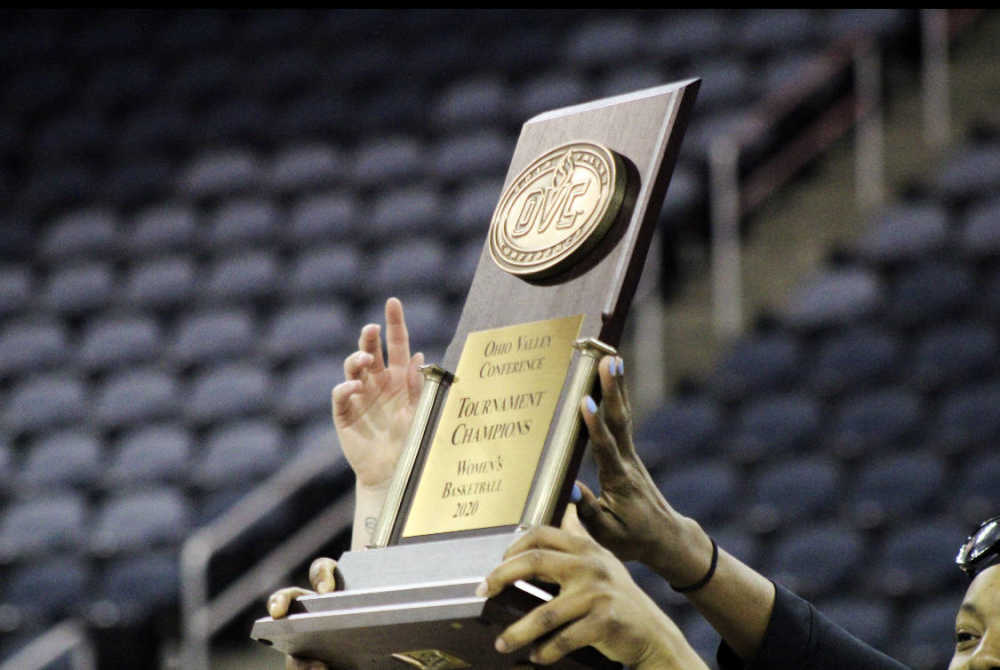 The Southeast women’s basketball team claimed the Ohio Valley Conference’s automatic bid to the NCAA Tournament by defeating the University of Tennessee at Martin Skyhawks 67-47 in the OVC Championship game on Saturday, March 7.

Southeast coach and OVC Coach of the Year Rekha Patterson had high praise for her team following the victory.

“They all believed in the vision that we sold them at recruiting,” Patterson said. “That this could happen playing the SEMO way — which is extremely hard, extremely tough and together.”

Thompson said escaping with a win over the Tennessee Tech Golden Eagles on day one served as a wakeup call for the Redhawks. Sophomore guard Taelour Pruitt hit a buzzer-beating 3-pointer in overtime to defeat the Golden Eagles 82-81.

“I felt like God gave us another shot to stay in it,” Thompson said. “I was like, ‘Look y'all, we gotta take advantage of this. We got another chance.’”

The Redhawks held Ohio Valley Conference Player of the Year Chelsey Perry to 15 points on 6-for-19 shooting from the floor. On Feb. 29, Perry scorched the Redhawks for 38 points to beat the Redhawks 78-72 in Martin, Tennessee.

Patterson said the plan to guard Perry was the same as it was on Feb. 29.

“We weren’t disciplined in the first half at Martin,” Patterson said. “I thought our young ladies were extremely mature in being able to watch film and hear the game plan and go out [and] execute it.”

Redshirt-senior guard Carrie Shephard finished with 13 points on 5-for-15 shooting.

Shephard said the last three days showed the Redhawks they do everything together.

Pruitt said the motivation for the weekend came from looking back at summer conditioning.

“Well yeah, these last three days were crazy, but I kept thinking about June, July and August when we were running every day and lifting weights every day,” Pruitt said. “I was just like, ‘We cannot let this slip away. We have been working so hard. We’ve been talking about this since we started offseason workouts.’”

Shephard said at the beginning of off-season workouts, the team set their phone backgrounds to a picture of the OVC championship trophy.

“Cause we’re always on our phones, so if we get on our phone we see OVC champion and it’s a good reminder, like, ‘This is what we’re working for,’” Shephard said.