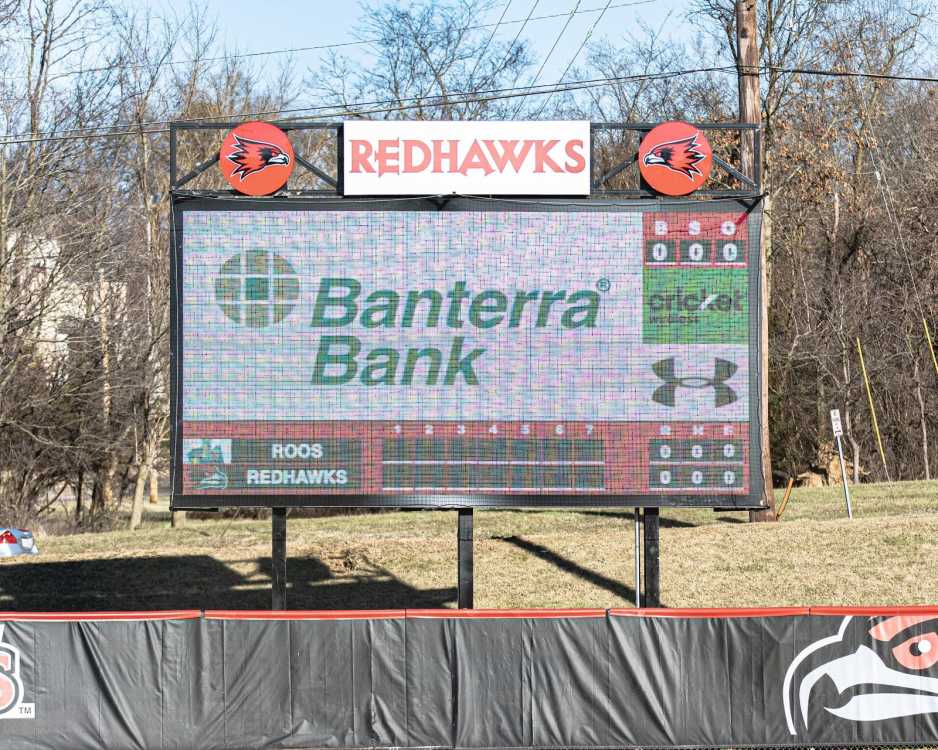 The new video board at the Southeast Softball Complex.
Photo by Jan Salmon

After bringing home conference championships in the Ohio Valley Conference last year, Southeast softball, football and soccer teams will be receiving upgraded scoreboards at their fields.

According to Southeast Vice President for Finance and Administration Kathy Mangels, the project cost $920,000 in total, with the board at the SEMO Softball Complex costing $210,000, and the board at Houck Field ending with a cost of $710,000. The board at Houck will be larger which accounts for the added cost.

Mangels said while the university fronted the bill, all the money will be made back.

“There will be private fundraising for this,” Mangels said. “For now, we’ve used one-time university dollars, but athletics will be doing fundraising to get the dollars to replace those funds.”

Some of the costs may also be offset by the new advertising abilities digital boards will offer Southeast.

“It creates a whole lot of other opportunities for more people to advertise than just we’ve got the top and the bottom of the scoreboard,” Mangels said. “It opens up a lot more possibilities for university athletics to package advertising opportunities.”

Southeast Director of Athletics Brady Barke also said getting the boards at the same time was intentional as a cost-saving measure.

“We were able to purchase them both through the same company,” Barke said. “We bid it that way intentionally hoping that there may be some cost-saving measures that could be realized.”

The new scoreboard at the Softball Complex was installed in February and is a 24-foot all-digital video board and 12 1/2 feet tall. It replaces an all-analog board installed in 1998.

The program’s success doesn’t hurt, Barke said, but new boards were a necessity.

“We got to a point where the board at Houck was really no longer able to get replacement parts,” Barke said. “It became very difficult to perform even routine maintenance on that board.”

Southeast had similar issues when it came to repairs for the scoreboard at the Softball Complex.

“We had difficulty getting bulbs for the board to keep it lit and actually be able to tell the score.”

While it might not be the primary reason, university officials believe the new boards will help with recruiting.

“When you’re bringing players, they are looking at facilities and they are picturing themselves playing in that stadium or ball field,” Mangels said. “Facilities are a big part of recruiting.”

Another thing fans can expect from the new video boards is a better experience at each venue.

“For softball, we can do video headshot introductions, starting lineups, interactive sponsorship games in between innings, those types of things,” Barke said. “If you think about football games, for example, the ability to show replays on a screen people can see while at the game.”

Mangels compared it to what Southeast has been able to do at the Show Me Center.

“It creates opportunities not just to highlight the game but highlight your fans,” Mangels said. “It’s one of the strategies where you’re creating a fan experience of people saying I want to be there.”

Softball’s next action will be March 8 at the Bulldog Slamboree in Starkville, Mississippi. Their next home game will be Mar. 11 against Saint Louis University. Football and soccer will start their seasons with the new video board in the fall.