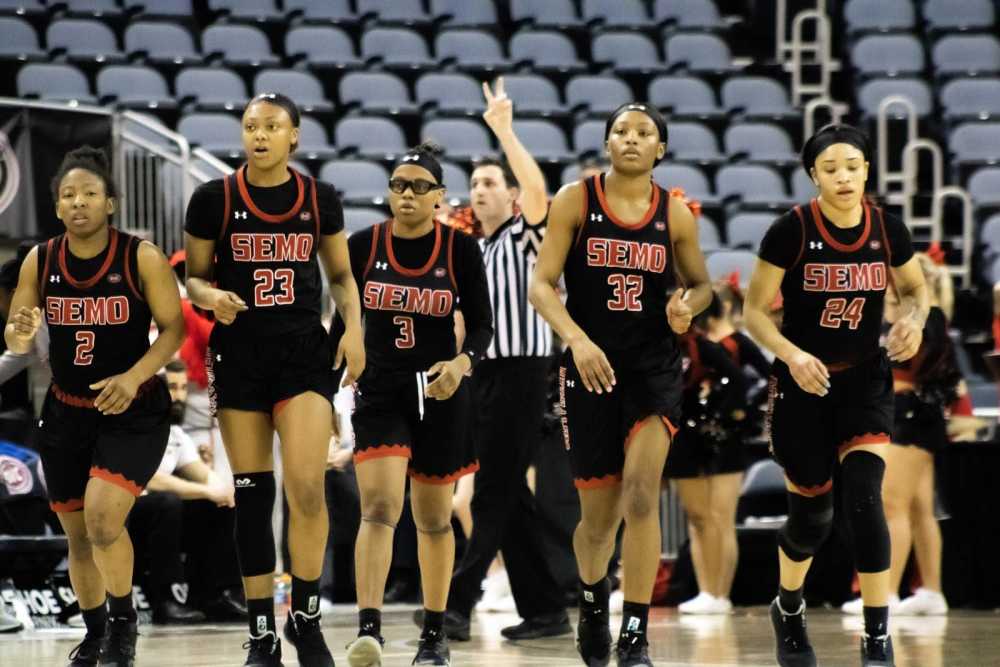 The women’s basketball team jogging onto the court in what would be their final game of the season on March 7 in Evansville, Indiana.
Photo by Ramond Buck

“This is just a really sad day for our student-athletes and coaches and staff.”

These were the words of Southeast Director of Athletics Brady Barke after the NCAA canceled both the men’s and women’s basketball tournaments as well as all winter and spring championships.

The Ohio Valley Conference followed the NCAA’s decision, with the Board of Presidents suspending all athletic activities including competition and formal practices. They also suspended all recruiting-related travel until April 3. The ban will be reevaluated at that point.

The decision especially hurts the Redhawks women’s basketball team, which was slated to play in their first NCAA Tournament since 2007, after winning the Ohio Valley Conference Tournament. Barke said he talked with the team and they have handled it well.

The OVC was one of the few conferences in the country to complete its conference tournament before the cancellation happened.

“There were a lot of people who never got that opportunity to participate in the postseason,” Barke said. “It provides some type of closure that [women’s basketball] got to reach the goal they set for themselves.”

The NCAA’s decision to cancel the tournament came after the organization’s decision to play NCAA Tournament games with only essential staff and family members. On the morning of March 12, several conferences began canceling conference tournaments including the Big Ten and Southeastern Conference.

“This is a historic day for college athletics in terms of what a huge and long-lasting impact this will leave,” Barke said.

The OVC’s decision affects the Southeast baseball, tennis, gymnastics, softball and outdoor track teams as well. Gymnastics is part of the Midwest Independent Conference but has had its senior day and postseason canceled.

“It's really hard when you're competing so well and you're turning your program around, looking forward to that opportunity, and you don't get it,” Barke said of the gymnastics team’s success this season.

With many team’s seasons ending so abruptly, it may pave the way for athletes to file for a redshirt year with the NCAA. Barke said if that were to happen, it would be difficult for universities to shoulder the financial burden.

“You have financial issues in terms of, ‘We awarded that money to two people, and now we don't have extra money,’” Barke said. “I hope the spring sports get another opportunity, but then the burden shifts to the institution to figure out how we honor scholarships.”

All Southeast sports are suspended indefinitely, so the next time fans may see the Redhawks in action is when fall sports kick off later this year.