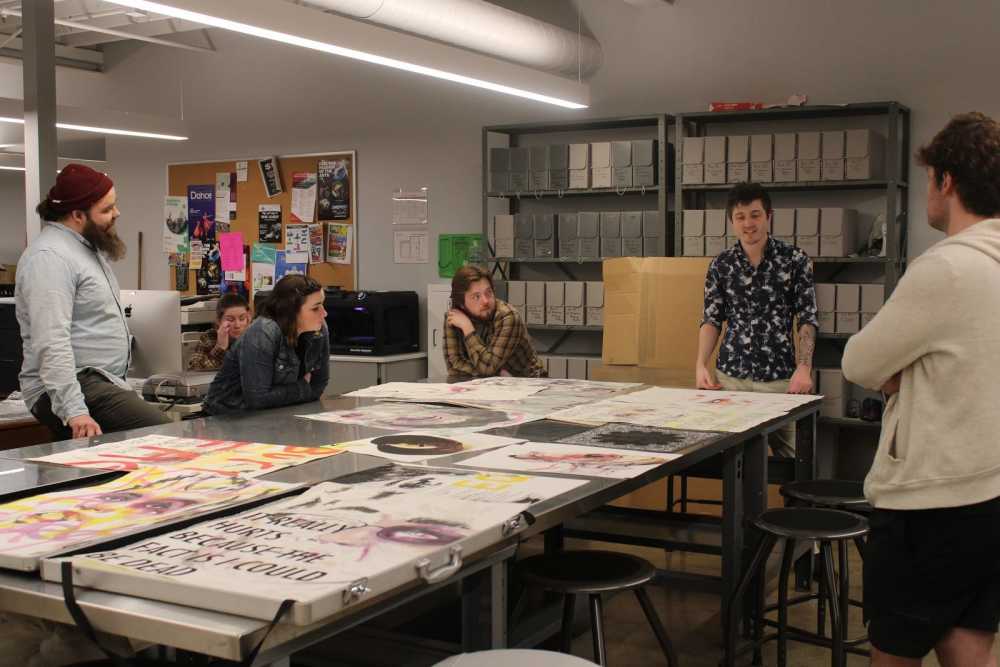 Petot shows attendants the physical screenprints from his series on violence against the LGBTQ+ community.

The presentation combined Petot’s printmaking artwork with a lecture on the subject of spreading awareness of violence against the LGBTQ+ community.

Petot’s pieces are inspired by personal interviews he has conducted with hate crime survivors and explores imagery and themes of brutality against the LGBTQ+ community.

“I like it to be this open dialogue where I'm not confronting or shaming anyone; I'm kind of just showing these stories on these individuals who have gone through traumatic experiences and making work from that,” Petot said.

Petot explained that while printmaking is the medium he generally uses for his artwork, he found particular contextual value in using it for the specific subject matter.

“Printmaking has a long-standing history with propaganda and the dissemination of information for the masses,” Petot said. “Essentially, it lends itself really well to making multiples, and I thought it would be interesting to use that in a form of activism.”

Petot explained the opportunity to host a lecture on this subject was valuable because it provided a platform to a minority group.

Petot mentioned he has not always had the open and accepting experience of being able to present his work in a public setting.

“As a queer artist, I know that the queer community is very large and often marginalized, and they just don't always get the same opportunities as other artists to show their work,” Petot said. “I think that it’s good for them to see this project and think, ‘Hey, here's an artist who likes working in the subject matter.’”

Petot added his goal in hosting this presentation is to spread awareness and inspire positive change within communities, while trying to erase any common misconceptions.

“What I want people to realize is that the queer community isn't here to have this grand agenda, and that I’m not trying to accomplish anything other than putting out these statistics and making people are aware that this is an issue,” Petot said. “The main thing I want people to take away is just that they have the opportunity to enact change if they want to do so,” Petot said.