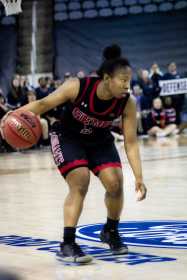 Redshirt-senior guard Carrie Shephard was a vital piece in the historic 2019-20 campaign of Southeast women’s basketball. Shephard averaged 16.6 PPG on 41.6% shooting from the field. Shephard led the team in 3-point percentage, shooting 40.2% from behind the arc. Shephard also had 46 steals on the season to lead the Redhawks.

The Redhawks defeated the University of Tennessee at Martin Skyhawks 67-47 on March 7 in Evansville, Indiana, to win the Ohio Valley Conference tournament and earn the OVC’s automatic bid to the NCAA Tournament. The win would mark the first time since 2007 Southeast earned a bid to the Big Dance.

The Redhawks dream season would be cut short on March 11 when the NCAA made the decision to cancel both the men’s and women’s tournaments.

Shephard said the news came as the Redhawks were set to start practice on March 11, and it was a shock to everyone.

“Then [Patterson] was like, ‘Let’s go to the locker room.’ I was like, ‘Oh God, somebody got in trouble, something happened.’ There was some kind of bad news because she wasn’t smiling,”’ Shephard said. “I put on my practice jersey, and I didn’t know it was gonna be for the last time.”

Shephard said the team talked in the locker room and focused on the positives from the historic season.

“We got to end our season on a three-game winning streak, and we were champions,” Shephard said.

Shephard noted she’s in the process of getting healthy while focusing on playing professionally next year.

“I’m planning to play professionally, so I’m getting ready to go through that process,” Shephard said. “I’ve been talking to my coaches and just other players that I know have been through that.”

Shephard transferred to Southeast from the University of Missouri in 2016. After sitting out a year due to NCAA transfer rules, Shephard suffered an ACL injury in 2017 forcing her to miss the entire 2017-18 campaign.

Shephard said overcoming her injuries made winning the OVC Championship that much sweeter.

“It meant a lot. It felt really good,” Shephard said. “Usually if you’re at a Power Five school you don’t have to win your conference to get a bid to the tourney. The way we went here, we earned our way there. No one gave us a handout. We’re going regardless. Like, ‘You have no choice but to put us there.”’

Shephard said one of her favorite memories besides winning the OVC Championship was seeing her teammates succeed.

“Seeing [Taelour Pruitt] go 7-for-7, you know Tesia [Thompson] drop 39, Denisha [Gardner] get 12 rebounds, all in the same game, that’s scary,” Shephard said. “Those are my favorite moments, like seeing my teammates at their high just killing it.”

“I’m glad I got to end my season as a Redhawk and as a champion,” Shephard said.