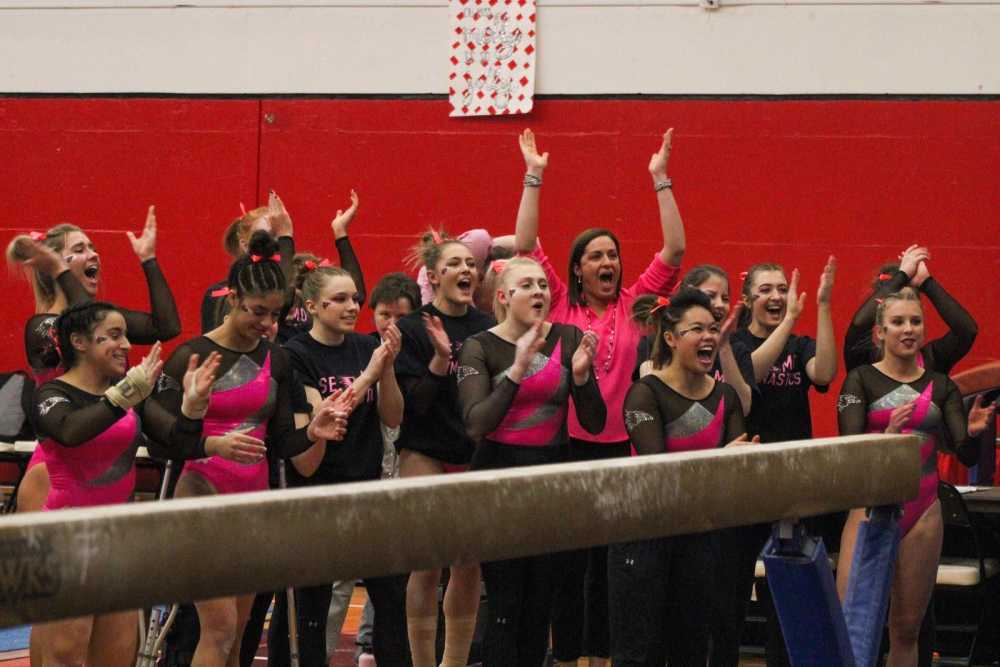 The Southeast gymnastics team cheers on a Redhawk during their home meet at the Parker Building on Feb. 7.
Photo by Ramond Buck

The season for Southeast gymnastics ended one meet away from the postseason when the NCAA canceled winter championships due to the COVID-19 pandemic.

The Redhawks finished with 194.500 for second overall at Lindenwood on March 6, not knowing the rest of their regular and postseason would be canceled. The Redhawks went from being winless in 2019 to finishing third out of five teams in the Midwest Independent Conference in 2020.

Kaziska said last year was a learning experience to help build into this season.

“The cancellation was very unfortunate, but of course the health and safety is what was utmost important,” Kaziska said. “In the future, we need to stay healthy all throughout the season and be a role model to others on the team.”

Southeast coach Ashley Lawson was awarded 2020 MIC Head Coach of the Year in her second year as head coach. She coached the team to an overall team score of 193.780, which is an average individual score 9 out of 10 per meet, third-highest in the MIC.

“We created a blueprint for what we were going to base our program off of,” Lawson said, “We had the hashtag “#weBAC” and the BAC stood for things.”

Southeast gymnastics used the hashtag under posts on their social media platforms as a motto to brand what the team was about this season.

The B in the hashtag stands for “being as one,” a message of unity among gymnasts.

“This means being one unit in practice and one unit at a meet. We always had our backs to our opponents so that meant we were always 100% focused on our team,” Lawson said.

The A stands for “adjust and adapt.”

“We are learning to adjust and adapt to make the situation the most positive so we can be successful,” Lawson said.

“Last year, we lacked a lot of confidence, and coming in this year, we were a little lower on our confidence also,” Lawson said.

With the cancellation, four seniors — Kendra Benak, Megan Dennis, Kenna Skepnek and Mackenzie Slee — were not able to have a senior night.

“It’s been an emotional roller coaster, especially for our seniors,” Lawson said. “It took the team a while and myself to let go of what could have been… we are grateful for the season we were able to have.”

Looking ahead to next year, the Redhawks will gain four new faces.

“I'm excited. I think the girls left here with the fire,” Lawson said about her team, “They have the fire and will to come back and continue this growing trend of putting SEMO back on the map.”

With the remainder of the season and championship cancellations, the Redhawks won't return to competition until next winter.