What is coming back, the music or the aesthetic of vinyl? 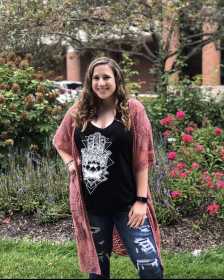 While I do not call myself a professional in the music world (yet), I do consider myself an eager participant of listening to music. I have been to over 30 concerts, have three full bins of records, I have been shown/listened to multiple kinds of music and have played multiple instruments.

I can recall many times when my mom and I would bond over music. Throughout most of my childhood, the music of my youth was classic rock. While I still listened to music of my generation, most of those songs did not stick out in my brain like the sounds of the electric guitars and exhilarating drum beats from the oldie’s music.

My mom has been a music fan since she was a child. I have always admired her vinyl record collection, and I have even stolen a few (shhh, don’t tell). Together, we would shun the people who would paint records or turn those records into bowls, because that is how much we respected the creation of those five rings on a record.

The first 45 record that was truly mine was one I received on my 16th birthday. I remember sitting in my living room with colorful tissue paper at my feet from the previous presents. I reached into that birthday bag and pulled out a record. I then gently pulled the record out of its orange, faded Columbia records paper case.

From observing my mom, I made sure to only grab the very edges of the record, to not scratch such a masterpiece. That one song on side 1 of the 45 was, “Take it on the Run” by REO Speedwagon. This was just one song that created who I am today.

As I have gotten older, my appreciation of records has grown and so has my viewpoint of them. I still continue to go to record stores and grow my collection while sneaking some of my mother’s records for my own. While record shopping, I have even expanded my music taste. I still buy records of artists I am familiar with, but also seek out the ones I do not recognize by the name or the song. Doing this is like pressing shuffle on Spotify on a random playlist.

Now, you may be wondering why I, a 21-year-old, am using a record player and still buying records.

My answer would be, why aren’t you?

Why do I have one? Well, it’s for the sound and the music. As I pull out my bin of records under my bed, I flip through to find the album to match with my mood. I pinch the vinyl out of its protective blanket, place it on the turntable, put the needle on the record, and close my eyes.

The sound of the needle moving up and down on the record, the occasional pop from the sound, that awful scratch played through that a previous owner left. It’s all there and it sounds unbelievable. It’s like a piece of history if you want to get that deep into it. Even the sounds of the artist are different on a vinyl record than when played through my earbuds on my phone. This description could be seen as an aesthetic itself!

But for most people, this idea is not the same in their minds as it is in mine.

I have noticed recently that more and more people are starting to buy record players and vinyl records themselves. Most people would look away from vinyl records because they were a thing of the past. However, I have had many friends recently come to me for advice of record players to purchase and even where I find my records to purchase. But the pressing question that continues to come to my mind through all of this is,

“Is the reason for the aesthetic or the quality of the sound produced?”

I feel like most people are buying records to make an aesthetic statement. It’s the same reason you see people now wearing concert shirts that say, “Guns N’ Roses,” “Prince,” or “Def Leppard,” but they can’t name a single song from the band.

A few months ago, I was in a store at the mall and noticed a girl wearing a Def Leppard t-shirt. Being the talkative person I am, I told her I liked her shirt and asked what her favorite song was from the band. She then proceeded to give me the most confused look I have ever seen, like I was a teacher asking her to name all the countries in the world. She said she didn’t know and essentially played it off to make her face look less red.

Most people aren’t buying the classic records of older artists of our past, but buying newer ones of that older band or even newer current artists. Now, I do praise those people who are buying newer albums of the older artist, because they are hard to find. But, are people buying them for the right reason? Are they buying them to really hear the artist or are they collecting the record because it is a popular artist?

Most of the sound of this year’s music is completely different than what it used to be, which is good. We should be expanding our minds on new music. We should be finding new forms of sounds and ways to produce them. I still listen to newer artists on my phone and have created many playlists on Spotify from that.

My sister, who has never once showed an interest in going record shopping or even wanting to listen to music on a record player, asked for a turntable for Christmas. I was shocked. I was even worried. My mom promised me her record collection one day, not my sister. Was she doing this just to make me mad? No way. She never once showed interest until now!

Later my sister posted a picture of the new gift. It was her turntable next to a plant in the window, a slick black record being played and a cup of coffee next to it. Ah, the aesthetic. It was a perfect moment and a very peaceful setting. I could imagine a Kenny Loggins song, maybe “Danny’s Song,” being played on it, but of course, it was a Front Bottoms album, with a stack of other new records next to it.

There was some disappointment, but also some appreciation in my mind. She was finally enjoying the vinyl I tried so hard to get her to enjoy with me. And then I realized, she found her own way to enjoy them, whether it be new or old.

I am not saying that what you are doing is wrong from this article, but you should always be open to other viewpoints. It is important to find what makes you happy in life and if this is one of those things, keep on going with that aesthetic in your room.

I am a believer to expand your knowledge of music. I think it’s important to listen to genres you have not heard before and be open to them, but still find that one that fits your vibe like a glove. Music is one of the powers that can immediately change an emotion for someone with a click or tap of a song. It is one of the truest art forms we have.

Overall, I personally believe many consumers, who are teens and young adults, are purchasing record players and vinyls now more than ever for the aesthetic. After reading this, you may think this is you. I may not agree with your choices, but I am happy to see that you are finally sharing a hobby I so enjoy. If this is not you and you really are interested in buying records and listening to them on a turntable, rock on.

I urge everyone to not stick to purchasing new records completely, but go out on an adventure and find those old ones in a stack in your parents basement or even the ones tucked away in an antique store.

I would tell you where I find all mine, but I can’t let you take all the good ones before me.