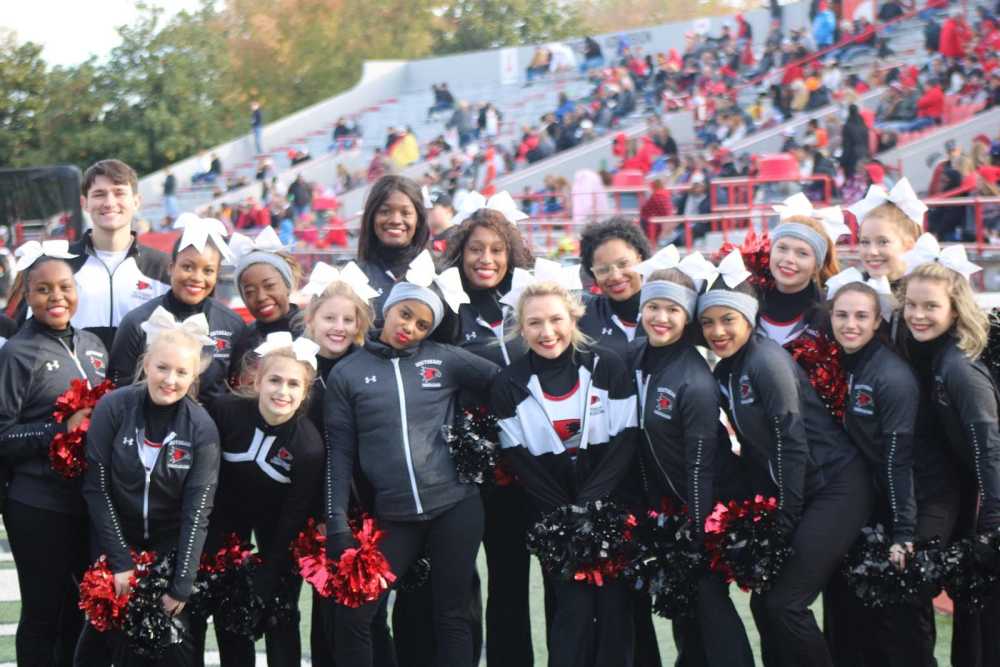 The Southeast cheerleading team poses during a football game on Nov. 8 at Houck Stadium.
Photo by Ramond Buck

With stay-at-home orders in effect, coach Billy Hoskins of the Southeast cheerleading team has innovated how the team will hold tryouts during the offseason.

On March 31, the team put out a call on Twitter asking potential applicants to email Hoskins for the tryout form. The form includes instructions for a video tryout as well as contact information and coaching references. Potential cheerleaders must also learn the Southeast fight song and fight dance for the tryout.

Hoskins said some of the most important things on the form are where they have cheered before and who their coaches were.

“I want to talk to [the coaches] about how they were to work with, how dependable they were and were they a good person,” Hoskins said. “Did they show up on time, were they responsible?”

Since cheerleading involves cheering at many of the games Southeast hosts, Hoskins looks for time managers who have had many responsibilities before.

“If you're involved in clubs or extracurricular activities, that means you're a good time manager,” Hoskins said.

The skills an applicant may exhibit in the video tryout include jumps, running tumbling, standing tumbling and stunts. The video tryout form states: “Remember NONE of these skills are required however, the more of these skills you can do will better the chances of you becoming a Redhawk cheerleader.” Hoskins explained he added the disclaimer because a person's physical skills shouldn't make or break them.

Hoskins said he can tell how good someone is at an aspect of cheer based on how effortless their attempt looks.

“If you're doing a skill and it looks like it was a struggle to execute then you obviously won’t score as well,” Hoskins said.

There is no way to do in-person practice or workouts with the team, so Hoskins is hosting Zoom workouts on Tuesdays and Thursdays for the team.

“When we get back into practice, we’ll notice who has been lazy and who hasn’t,” Hoskins said. “Hopefully for their sake they continue to work out on their own.”

Junior cheerleader Ashlynn Wyman said she prefers in-person tryouts but understands this is how they need to be done.

“When you’re at tryouts you get a feel for what the team is going to be like,” Wyman said. “It kind of sucks that people are going to miss out on that.”

For the video tryout, Wyman said her main concern is stunting. Stunting in cheerleading is the pyramid building and tosses that are often shown at games.

“I have tumbled since I was two so I’m not worried about that part,” Wyman said. “With stunting, you have to get girls who are available and it’s tough since you can’t have more than 10 people together.”

For more information about this year's tryouts, email Hoskins at billy.hoskins@kellyhawks.org.