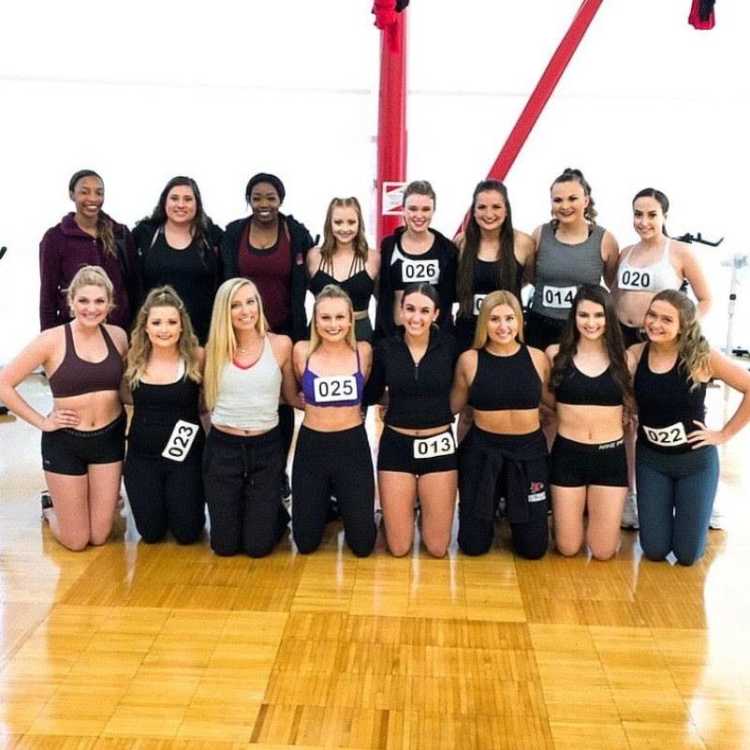 New and returning dancers after auditions on April 27, 2019.
Photo submitted by Rachel Kimminau

Southeast’s competitive dance team, the Sundancers, announced on April 14 they will be conducting auditions for the 2020-21 team virtually.

Dancers received access to audition material on April 25, and must send their recorded audition to coach Tatianna Parham by May 3.

Parham said she hopes to keep the audition process as similar to the face-to-face auditions as they can be in the midst of the coronavirus pandemic.

“We are still going to try to keep all the components the same as far as keeping with the dances that they have to learn,” Parham said. “They still have to show us the technique and they still are going to do an interview portion, but it's all going to be done by video, and then they'll have to send that into us.”

The audition process normally is conducted over one day, with two rounds: the morning and afternoon.

“Typically, the morning is welcome to anybody who wants to try out for the team and then if they make it to the second round, they would then join any of the returning dancers,” Parham said.

Senior Rachel Kimminau said the dancers will learn a jazz and hip hop routine along with different techniques of turns, leaps and other hip hop tricks.

Kimminau said the process of virtual auditions is different but a good opportunity. She sent a video for her audition when she couldn’t make the date her first year.

“My freshman year, I tried out with a video and it obviously was less nerve-wracking for me, but I know [Parham] is a little bit more critical,” Kimminau said. “So you have all this time to get it perfect, and so if it’s not perfect in the video, I think that you can make judgments bas

Kimminau said because the dancers have more time to learn the dance routines and have the opportunity to film multiple times it becomes less stressful.

Parham believes virtual auditions will be a challenge for both the dancers and the judging panel.

“It is a little harder, and I think we put a little bit more skepticism on their routine or their skills because they do have the opportunity to refilm themselves and make sure they got the best one on camera,” Parham said.

The judging panel will stay consistent as they are using the same score sheet as face-to-face auditions.

“I will send the videos to all of my judging panel, which is typically around seven people, and they are going to have to fill out their score sheets just the same,” Parham said.

Kimminau and Parham are optimistic about the audition process and the upcoming season.

“As long as things do go back to normal like they’re predicting right now we’ll start practicing in June and July,” Parham said. “We will go to camp in July, and then the girls will move in August, where we'll start practicing.”

The Sundancers perform at every home football game, and men’s and women’s basketball games along with Nationals in April.

For more information about the Sundancers, contact Parham at tatianna.parham@gmail.com.