Brad Korn settles in at Southeast 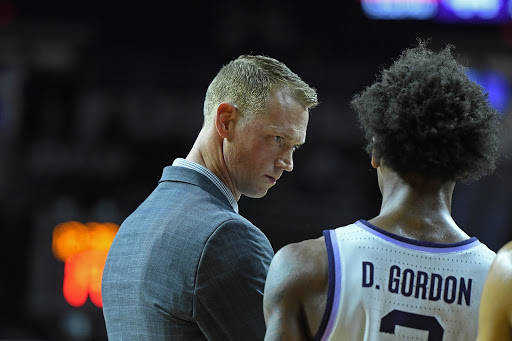 Brad Korn coaches a player during his time at Kansas State.
Photo courtesy of Tom Gilbert

The Southeast men’s basketball team hired Brad Korn to be the program’s next head coach on March 23. A month later he has signed two recruits and is preparing to settle into his new home of Cape Girardeau.

Korn is taking over a Redhawks team that most recently went 7-24 overall and 3-15 in the Ohio Valley Conference.

During Korn’s five years as a Saluki, the team made the NCAA tournament three straight years, which included a run to the Sweet 16 in 2002 where they fell to the University of Connecticut Huskies. Korn averaged 9.7 points per game and 4 rebounds per game during his senior year at SIU.

One of the things that struck Korn about Southeast was the fan base.

“I think there’s a lot of desire for the program to do well,” Korn said. “I think it’s a knowledgeable fan base, they want to see their team perform well … You want to go to a place and a school that supports the program and supports basketball and understands it, and I think that region, the school, [and] the leadership of the university all embody that.”

During his time coaching under Weber, Korn learned the value of honesty when coaching.

“Those guys were always completely honest; I mean they were brutally honest,” Korn said. “They didn’t give us any choice but to work hard. I think when you’re honest with people and you work hard, you’ll get through some tough times and you’ll be able to stick it out.”

Korn said he expects the five guys on the floor to give everything they have at all times and play team basketball.

“It’s just gonna be extreme effort at all times, one more pass offensively, and then attack,” Korn said. “We have the pillars and the cornerstones of our program that we’ll use and rely on. The character, the passion, the accountability, the unity and the thankfulness.”

The NCAA made the decision to suspend recruiting on March 13, and it has made recruiting more difficult for Korn and his staff.

Being a former Saluki, Korn said the first time he coaches against Southern Illinois will carry a “little more internal weight” for himself, but at the end of the day is just another game they will try to win.

“Every game is going to be its own game that we’re going to try and win,” Korn said. “I’m not going to sit here and act like it doesn’t carry a little more internal weight to me… It’s about the players and it’s about them going out and winning the basketball game.”

The Redhawks will look to improve during the 2020-21 campaign which should tip-off in early November.