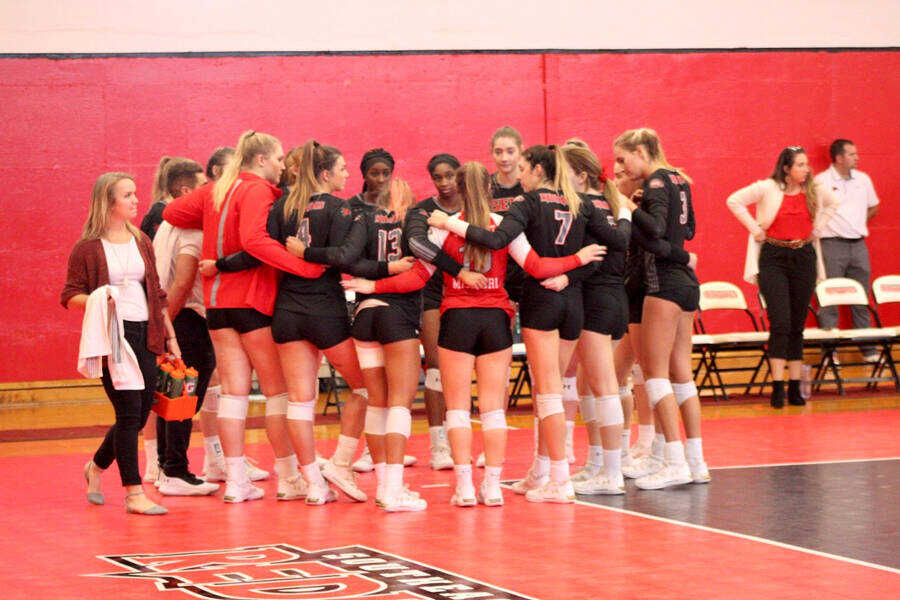 The Southeast volleyball team huddles between sets in a four set win over Jacksonville State on Nov. 2, 2019.
Photo by Ramond Buck

The Redhawks volleyball team will receive their 2019 Ohio Valley Conference Tournament Championship rings on Saturday, Aug. 22. The event will be held at Houck Field and is limited to players and coaches.

Head coach Julie Yankus said this ring was special to her because it was her first as a coach.

“I had the privilege of getting that honor as an athlete, but seeing it from the coach's side is a whole new thing,” Yankus said. “You realize these opportunities are very difficult to come by especially in a competitive league like the OVC.”

Junior setter Claire Ochs said the ring symbolizes the hard work the team put in during the season.

“We all did it together so [we’re] happy that there’s a lot of us as a unit and like a family [and] later in life is definitely going to be something we cherish for a while,” Ochs said.

Ochs said the anticipation of receiving the rings is going to make the ceremony more enjoyable.

“[It’s] definitely a long time coming because once we were sent home we weren’t able to get them sooner,” Ochs said. “I think now that we’ve been waiting for it and it’s been so long since we’ve won I think it’s a good reminder of what we accomplished.”

With the way things are going in college athletics currently, Yankus said the ceremony will serve as a positive during this time.

“This is definitely going to be a very special weekend because hopefully for a little we can just sit back and appreciate what we did in the 2019 season,” Yankus said. “We can look back now at all the time we get to spend together playing the sport we love.”

The freshman on the roster will be in attendance at the ceremony but will watch from a distance. Yankus thinks that the freshman being in attendance will serve as motivation to stay focused during the season.

Ochs hopes the ring serves as a good reminder to the team to continue working in the gym despite the season being moved to the spring.

“Just because our season was postponed doesn’t mean we can slack off,” Ochs said. “We definitely have to keep working in the gym and keep that as the mentality in the gym.”

Yankus said anytime she looks at the ring it will remind her of the mental toughness of the team and the chemistry they built.

“The line to success is not a straight upward trajectory,” Yankus said. “There were a lot of bumps along the way, which made the success at the end even more sweet.”

The Redhawks are hoping to kick off their title defense in spring 2021.