A short, sweet way to bring back music 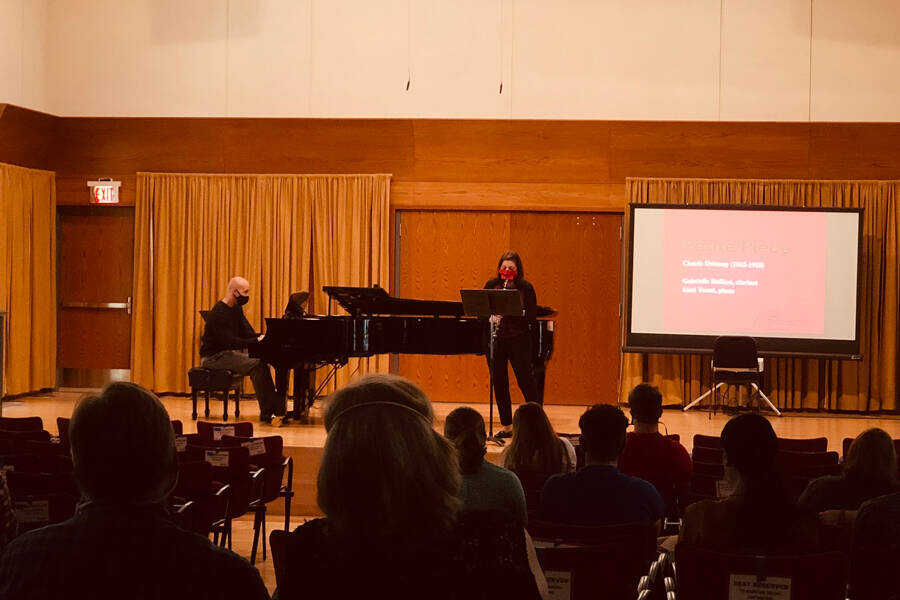 On Aug. 30, clarinet player Gabrielle Baffoni and piano instructor Matt Yount perform the song “Petite Piece” at the first Sundays at Three concert of the fall 2020 semester. Faculty members performed short pieces for the audience that incorporated the title of the series, “The Art of the Miniature.”
Photo by Hannah Radden

After a six-month break from the stage, Southeast River Campus hosted the first live music concert of the semester, opening with the Sundays at Three Series under the direction of Gabrielle Baffoni, assistant professor of single reeds at Southeast.

Southeast faculty members participated in playing in the first series titled “The Art of the Miniature.”

A lesson with a student inspired the concert’s title in Baffoni’s mind.

Baffoni said the aforementioned student participated in an English class that was discussing short stories. The two of them bonded over the love of reading short stories and how the stories are told in a short amount of time.

“That conversation just stuck with me, and as I was thinking about programming for the next year, it just never really left my head. I thought, ‘There is a lot of short music, too, so wouldn’t it be fun if we celebrated tiny music,’ Baffoni said.

The Arrow · A short, sweet way to bring back music

For the performance, faculty members presented short pieces to incorporate the miniature impression. Their parameters for the event included finding a single piece under four minutes or a set of pieces under eight minutes, Baffoni said.

Shane Mizicko, associate professor of music and director of Percussion Studies at Southeast, said he selected his piece because it was “short and sweet.” He knew the piece “A Minute of News” by Eugene Novotney was a single movement out of a large collection of work that would fit the requirements for the concert.

Sophia Han, assistant professor of upper strings and concertmaster of Southeast Missouri State University, selected her piece “Quarantine Etude No. 3 For Violin” by Piotr Szewczyk which was just under 52 seconds. Han said she selected this piece because of the “Picasso-esque” sound and how angular it is.

The show not only included short musical pieces from faculty, but also included other art forms, such as literature and film. The series began with a short poem read by Baffoni titled “Invitation” by Shel Silverstein and later showed a viewing of the film “The Gift” by Tim Garrett that played at the 2017 Fault Line Film Festival.

While having to adjust to a new way of playing this semester, instructors and other musicians are making sure to do their part to keep the performances alive. This is accomplished by wearing masks and innovating new ways to wear masks while playing.

“[The mask] is uncomfortable, but it is a small price to pay to be able to play live with other humans,” Baffoni said.

At this performance, assistant professor of trumpet Kevin Tague wore two masks. The first had a small hole to allow for the instrument to play. While he was resting, he would place another mask over his face to cover the first with the hole. He also had a mask for his trumpet. This mask would serve as a covering for the bottom opening of the trumpet to protect the audience, as well.

The next Sundays at Three performance will be held on September 27, 2020. The series will feature alumni who play woodwind, brass and viola. This will be the first alumni performance for the series that is directed by Baffoni.