Unwritten rules: are they still relevant? 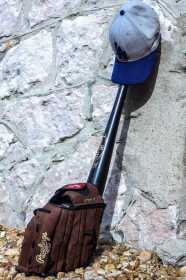 Baseball equipment rests against the base of a building in Cape Girardeau, Missouri, on Sept. 3.
Photo illustration by Ramond Buck

The score when the pitch came? The Padres were up 10-3 in the eighth inning, and went on to beat the Texas Rangers 14-4.

The MLB’s leading home-run hitter came under fire for violating one of baseball’s ‘Unwritten Rules’ by swinging 3-0 while leading by seven runs after seven innings.

So what is an unwritten rule?

“An unwritten rule is like Standard Operating Procedure,” Southeast baseball coach Andy Sawyers said. “This is how the game is supposed to be played. Obviously because they are unwritten, everyone has a slightly different take on it. It’s like a code of conduct — ‘This is how you’re supposed to play the game.’”

Rangers manager Chris Woodward was outspoken about his distaste of Tatis’ home run.

"I didn't like it personally,” Woodward said. “You're up by seven in the eighth inning, it's typically not a good time 3-0. It's kind of the way we were all raised in the game. But ... the norms are being challenged."

Sawyers saw no issue with Tatis swinging in that situation. To him, it wouldn’t make sense to not try to get runs, in any situation.

According to Sawyers, it’s the players' livelihood to get hits, and if the opposing pitcher and manager don’t like it when the batter takes a good hack, ‘Then you should make a better pitch.’

““I thought it was perfectly fine,” Basler said. “In my opinion, you can swing whenever 3-0, and I think the only reason it blew up is because he hit a home run.”

The swing heard around the Twittersphere brought forth a lot of debate over unwritten rules, with many players coming to the defense of Tatis.

Tampa Bay Rays pitcher Colin Poche said about the scenario, “If you don’t like giving up 3-0 grand slams, PITCH BETTER.”

Most of the athletes who tweeted support agreed with Poche, and Sawyers agreed as well.

The basic principle of the unwritten rule is to avoid having a team run up the score on another team, when the game is out of hand. With that being said, the most runs scored in a single inning in the MLB is 17. So when is a game out of hand?

Sawyers understands the principle of the unwritten rules, but doesn’t agree with all of them, especially the one in play in the Tatis scenario.

“We do shut some things down. Generally the rule is, seven [runs] after seven [innings] or when the lead gets to 10 runs or greater,” Sawyers said. “So if we’re up 10 early in the game, I’m not gonna bunt or run or things like that — we’re just gonna play baseball. Now, that doesn’t mean we stop trying to get hits; it just means we’re not gonna use the entire playbook.”

That logic seems to be reflected by many of the athletes on Twitter, and hasn’t necessarily been questioned, outside of the managers in the Padres-Rangers game.

There are many other unwritten rules in the game of baseball, and Sawyers described a few, and scenarios where he would and would not follow those rules.

Although he does agree with this rule, he doesn’t agree with it in every situation.

“That is one that I don’t completely agree with,” Sawyers said. “If it’s 10-0, that’s one thing, but if it’s a 2-0 lead, and you got a guy who is going to bunt and run, if he comes up to the plate, I mean, that’s what he does. His job is to bunt and run and use his speed. If that guy bunts, I’m fine with it. But when a power hitter steals a hit to break up a no-hitter, there’s where the unwritten rule comes in.”

Sawyers also believes that part of the reason unwritten rules are being challenged is because the players of today didn’t necessarily grow up the same way older players or managers did.

“I don’t think they’re aware as much, I don’t think they watch as many baseball games as they used to,” Sawyers said. “I guarantee every one of [my players] saw that swing Tatis took on Twitter. But I bet they didn’t watch the game.”

Sawyers went on to mention that some players today may not have been educated on the unwritten rules. He cited a game situation from two years ago when one of his quickest players stole second base when they were up by double digits.

“He wasn’t trying to do anything inappropriate, but he had no idea,” Sawyers said. “That’s the thing about unwritten rules — they’re not written down.”

Regardless of how some, if not most, players and coaches feel about unwritten rules, they will continue to be followed in some capacity, and continue to be enforced by pitchers, at least in the MLB.