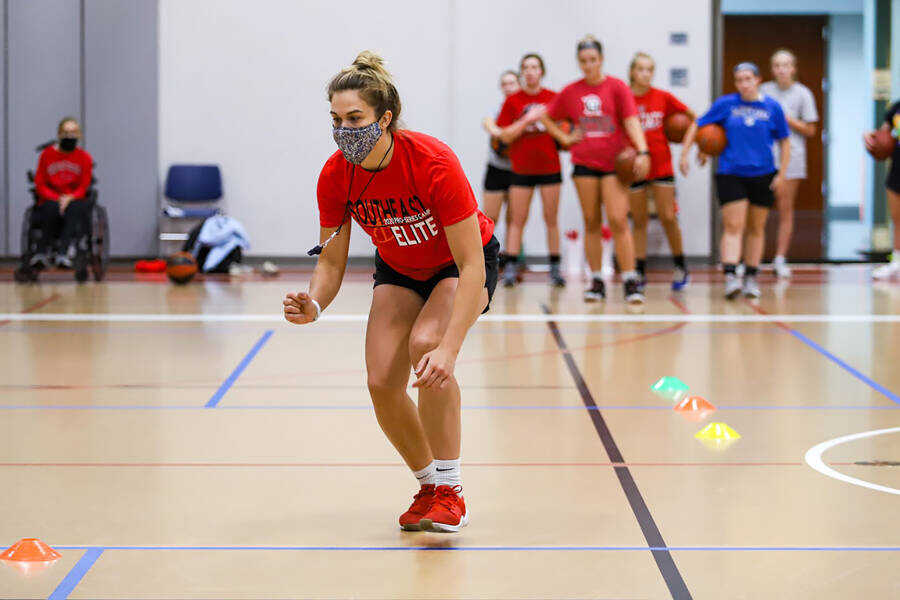 Erin Bollmann demonstrates a drill at the SEMO Elite camp on Sept. 19 at the Jackson Civic Center in Jackson, Missouri.
Photo by Ramond Buck

Hackmann was a 2017 graduate from Southeast who averaged 14.4 PPG to go along with 21 steals during her senior year.

Bollmann, a 2016 graduate from Southeast, said one of the main reasons she plays basketball is to pass on knowledge to the next generation.

“I’m doing this so that the next generation can have a blueprint to go off of for their career,” Bollmann said.

Shephard, a 2020 graduate from Southeast, said she was looking forward to giving back in a different role.

“The thing I really have a passion for is helping people get better,” Shephard said. “Whether that’s ball handling, shooting or even the mental side of things.”

Shephard said she didn’t hesitate to accept the invitation to coach when Bollmann reached out.

As well as on-court work, another important teaching point at the camp was how to carry yourself off the court.

Not only was Shephard excited to work with Bollmann and Hackmann, but she was excited to learn from them in the process.

“Both [of] them are pros, and that’s something I’m currently in the process [of doing] to be on that level,” Shephard said. “It’ll be good to see how they both are taking their game to the next level.”

“The things you do off the court matter almost as much as what you do on the court,” Bollmann said. “It’s more of a holistic approach to basketball that I wish I knew when I was younger.”

Bollmann said the difference in the trio’s style of play was beneficial in covering all aspects of the game.

“Carrie breaking a three-point record can bring an amazing shooting form [and] confidence [to the camp],” Bollmann said. “Olivia Hackmann is aggressive, [and] she dominated overseas for a year so she could share her career path.”

Shephard said if there was one thing she wishes someone would have told her when heading into college it would have been about the work ethic required.

“You were working hard, but you weren’t working as hard as you thought you were,” Shephard said.

She credits Southeast women's basketball coach Rekha Patterson for opening her eyes to that way of thinking.

“You think you’re giving everything you got, but there’s still always more,” Shephard said.