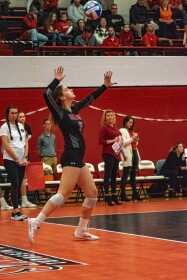 Southeast volleyball’s focus is now on building off last season's success after going 23-11 (12-4 Ohio Valley Conference), and continuing their winning ways into the new year. Senior defensive specialist Ally Dion has been a big part of their success over the past three seasons.

Dion had 286 digs in the 2019 season, an average of 2.23 digs per set. Dion’s playing experience combined with her talent shows on the court as she currently ranks fifth all-time in single season scoring for serving aces at Southeast.

Dion is one of Southeast's three returning seniors for the Spring 2021 season along with Maggie Adams and Laney Malloy.

“Since we were ranked number six in the preseason last year, we’re expected to do really well, and we did, so now we have a target on our backs,” Dion said. “I think we have to change our mentality to having the same confidence, putting the new pieces together and focusing on our goals.”

The Redhawks have more time than usual this year to work on chemistry and build essential camaraderie.

“We didn’t have the summer like we usually do to do bonding activities, so that’s what we’re doing right now. We’re just getting used to playing next to each other so it can give us time to build that team chemistry for the season,” Dion said.

Volleyball has been an outlet for players like Dion for years, and her journey since freshman year has provided her with experience for the future.

“Since freshman year, we’ve had a lot of coaching changes, but every single one of those coaches have impacted me and the whole team,” Dion said. “Now we’re [seniors] getting with our freshman class and all the new people because we’re focused on growing as a team and having success.”

Dion will play her final season of volleyball this year with new teammates and is confident in their ability to remain successful.

“During the off-season on campus, we train hard and lift with our strength coach Tony Brutofsky four times a week,” she said. “Depending on the amount of hours we are allowed to have, we’ll practice in the gym anywhere from three to five times per week … this all keeps us prepared for the upcoming season.”

Dion said she is looking to continue her all-around play and contribute in any way possible.

“I’m going to continue to be helpful to the team and score points in as many ways as I can being that person that gets kills, [and] aces are the way I score,” Dion said.

Dion said that after practicing with the new team, she is optimistic and excited for the season. Dion thinks the Redhawks will not only have a good season this year, but in the future, as well.

Due to Covid-19 restrictions, Dion and the Redhawks are hoping to begin matches in the spring with the OVC electing to play a conference-only schedule in Spring 2021.