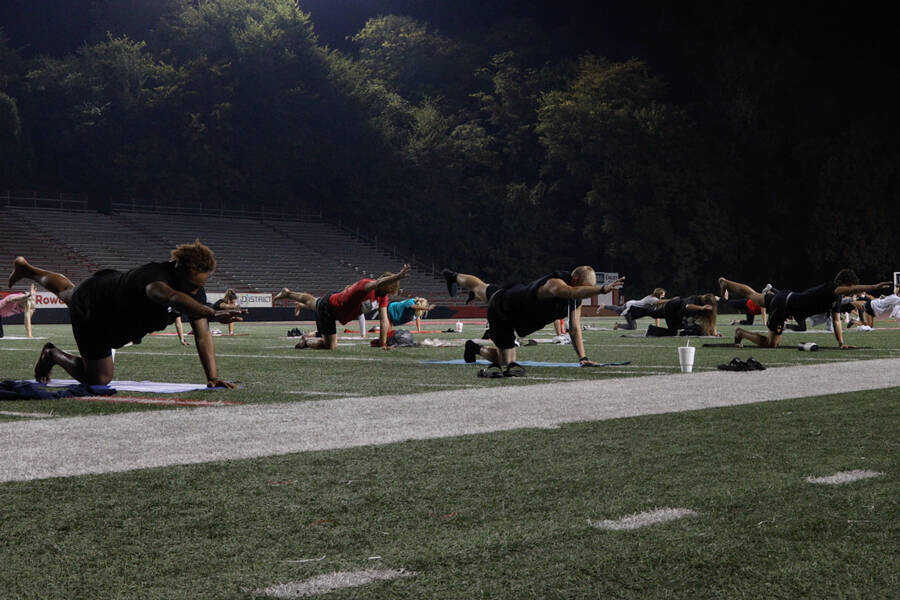 Mental Health Awareness Week was established in 1990 in an effort to increase awareness about mental health issues. The week of awareness starts Oct. 4 and ends Oct. 10.

Southeast’s SAAC President and the Redhawk’s Ohio Valley Conference Representative Anna Griffin had the idea after speaking with other SAAC representatives across the conference.

“Our main goal was to get athletes to feel like they could put their bodies and mental well-being first,” Griffin said. “Those two are one and the same.”

Streeter said, “All the athletes are overly worked with classes and practice that sometimes they need meditation moments to help them rejuvenate. I am really looking forward to all student athletes releasing their stress.”

Southeast professor Annette Slattery led the yoga instruction on Thursday at Houck Field. Slattery has been involved with yoga for 12 years. After realizing she needed the relaxation in her life, she began instructing yoga classes here at Southeast. Slattery also teaches two evening classes at Fitness Plus in Cape Girardeau.

Slattery believes yoga is beneficial in many ways and also helps you “forget about your worries for a period of time.”

“It makes you focus on the present moment. It takes you back to your breathing,” Slattery said. “We breathe so shallow throughout most of our daily activities, and we don’t realize that we have the most powerful tool within our control in our bodies every moment of the day.”

Slattery said she has her Southeast students write to her, and they have stated how different they started to feel after her yoga classes.

“[They said] how different they started feeling and how they want to smile at everybody when they leave,” Slattery said.

Slattery said yoga is a “fine addition” to physical fitness that we as people forget about sometimes.

“It’s not just physical — it’s mental and can be spiritual,” Slattery said.

Griffin hopes to be able to continue the weekly yoga meetings with athletes, and she believes the first meeting was beneficial for the athletes who attended.