Vacancy in the Supreme Court: how it affects Southeast 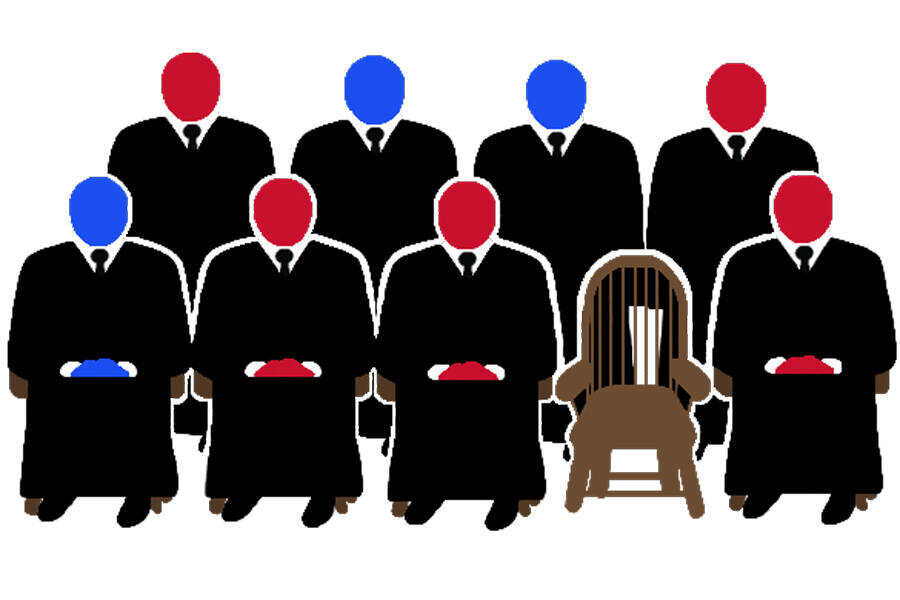 As of Oct. 19, the Supreme Court has eight members; three Liberal and five Conservative. With Justice Ginsberg’s recent death this leaves her seat open and available for the current president, Donald Trump to name a nominee to replace Ginsberg. If a conservative nominee is confirmed by the Senate, the balance will shift more to the right side on the political scale.
Graphic by Miriam Gorecki

The average vacancy length since 1962 on the Supreme Court is 88 days; with 38 days between the nomination of Judge Amy Coney Barrett on Sept. 29 and election day, this becomes the second-shortest vacancy in an election year, following the election of 1864.

A vacancy on the Supreme Court only occurs after a justice retires or passes away. The most recent vacancy opened after the passing of Justice Ruth Bader Ginburg Sept. 18.

There have been arguments from both the Democratic and Republican parties about whether the decision about the Supreme Court should wait until after the election. However, if President Donald Trump loses the election, he still has the power to push to fill the vacancy through the end of this term in January.

Hamner Hill, chairperson for the department of political science, philosophy and religion, said one reason Trump is trying to fill the vacancy quickly is so Barrett can hear the arguments in a case challenging the Affordable Care Act Nov. 10.

“If Judge Barrett is confirmed and takes her seat before Nov. 10, then she would be able to vote in that case, and it's conceivable that the entire Affordable Care Act could be ruled unconstitutional,” Hill said. “If that happens, college students who are on their parent's insurance claims could be kicked off the plan because the Affordable Care Act requires insurers to keep college students up to age 26 on their parents' plans. So anybody who's invalid right now could find themselves uninsured and then having to buy private insurance.”

Along with the Affordable Care Act, many political analysts believe her religious values and beliefs will influence her rulings, especially when it comes to abortion rights.

Hill said this could be an ongoing conversation between those who support the right for a woman to choose to have an abortion and those who do not, as nothing can happen in Roe v. Wade until a case is brought to the Supreme Court.

“Assuming that she is confirmed and becomes Justice Barrett, nothing happens to Roe v. Wade right away, because there's not a case on which she would be able to vote that would have any impact on it,” Hill said. “So a case would have to come before the court; so a state that opposes abortion rights as a state would have to pass a restrictive law, and that law would have to be challenged in court. It could take years for a case to make its way to the Supreme Court — that would give Justice Barrett an opportunity to strike down Roe v. Wade.”

Trump and other Republican leaders have said they expect the battle of the election to be taken to the court, so it is important to Trump to have a justice with similar values to himself.

If confirmed before the Nov. 3 election, Barrett would have a vote if the Supreme Court had to be involved as they did in the 2000 Bush-Gore election due to close results that called for a recount. If she is not confirmed by then, the current eight justices would vote on the theorized circumstance by Trump and other politicians.

Hill said the process of nomination begins with the President’s advisors preparing a list of potential candidates for him to look over.

Once nominated, the candidate will go in front of the Judiciary Committee in televised hearings that tend to last three to four days. The committee will do a thorough background and credential check before undergoing the hearings in which senators can ask the nominee about their experience and qualification. The Senate will then vote to confirm or deny the nominee for the Supreme Court.

Barrett has served on the 7th Circuit Court of Appeals for less than three years, working prior to that at the Notre Dame Law School for nearly two decades.

As the current nominee, Barrett has been compared and contrasted to Ginsburg by analysts, as her prior beliefs could undo much of the work Ginsburg did for equality. However, Hill compared the two for the similarities in their nominations.

“It's said that when Justice Ginsburg was appointed back in ‘93 by President Clinton, she was not one of the top candidates until she got to meet with the President — and in that meeting, she just impressed him,” Hill said. “Earlier in his term, when the President nominated Brett Kavanaugh, Judge Barrett was also a contender, and apparently, she didn't impress the president as much the first time around, but she obviously has this time.”