A world of photography in Cape Girardeau 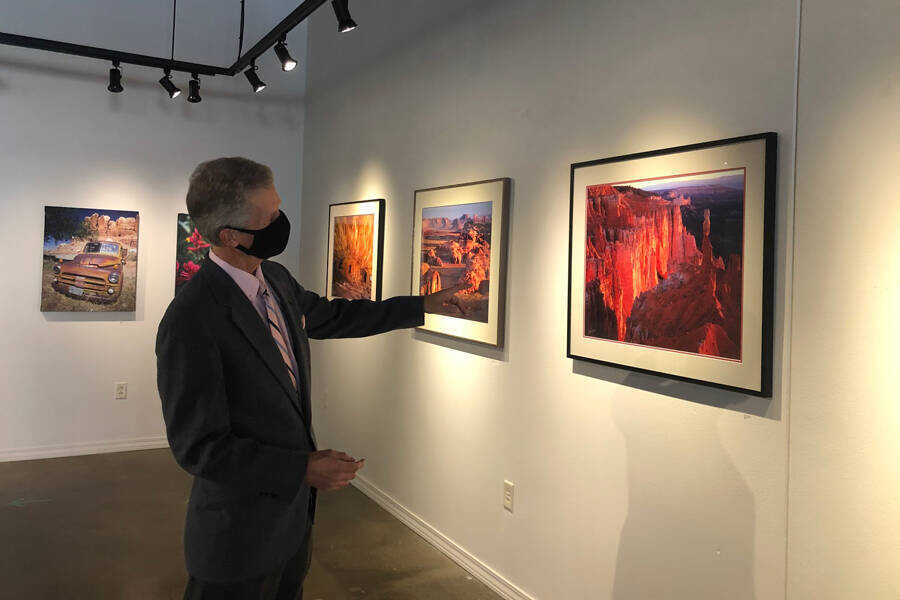 Brian Alworth, outdoor photographer and first alert meteorologist for KFVS, describes his outdoor photographs at his exhibition titled “30 Years of Photography.” The display will be up until Oct. 30 at the Southeast Missouri Council of Arts.
Photo by Hannah Radden

Through the main doors, The Arts Council of Southeast Missouri housed a vivid world of photography. When approaching a picture along the white walls, the outdoor prints were clear and life-like, like an opening to natural splendor in the world. The pops of color and subtle black and white images added variety to the whole gallery.

Brian Alworth, outdoor photographer and first alert meteorologist for KFVS, displayed his photographs at the Arts Council this past weekend. The exhibit, titled “30 Years of Photography,” presented images from the excursions Alworth has taken across America. Alworth said the theme for his work is based around the idea of peaceful solitude.

Most of the photos were shot purely on film cameras; however, there are a few shots taken with a digital camera. Some of the film cameras used included a Pentax 67 and a View 4X5 camera.

“When people hear film, they think of their old Nikon 35mm camera that they have somewhere in a box in the basement or attic,” said Alworth. “Most of these were all taken on medium- and large-format cameras, which are bigger and more complex.”

Alworth has traveled a great distance to achieve his outdoor images. His favorite locations to capture these outdoor photos are the desert and Four Corners location in the Southwestern United States.

Some of the other locations Alworth has photographed include Horseshoe Lake, Ill., Reelfoot Lake, Tenn., Northwest Arkansas, the Great Smoky Mountains and more. Alworth said one of his favorite shots displayed in the gallery is a black and white image from a little canyon in Utah.

Most of his outdoor adventures take many days, and he enjoys hiking and camping along the way to find the perfect shot.

“Not only do I go there, but I usually have to go back two or three times to the same place to get the perfect light or image,” Alworth said.

“I kinda got hooked on it,” Alworth said.

While he enjoys using film cameras, he has had struggles along the way.

“Digitizing old film, black and white negatives and slide film is not a trivial thing,” Alworth said. “It is expensive and takes time. So it has taken a long time for me to build up an inventory of framed and printed and digitized old film shots.”

He said it takes time to go from image to a framed print, as well. The process for Alworth can take up to four to five years, because he has a hard time narrowing down his favorites photos.

Since many people do not know about his ability to take photos, he says he sometimes receives shocked reactions from people who view his gallery.

“I have had several people come up to me and say, ‘We had no idea. We heard that you liked doing photography, but we saw your show, and we were shocked,” Alworth said.

Alworth said aspiring photographers should relearn the basics of photography.

“My advice to people who are really serious about photography and want to know what they are doing is to take that fancy digital camera and throw it into a lake, figuratively,” Alworth said. “Put it on a shelf, go online and buy an old, used, manual 35 mm film camera that you have to learn how to use or otherwise it won’t work. So you have to learn how to use the lenses, the timing, shutter lease and buy a tripod.”

The exhibition will display Alworth’s work until Oct. 30. For more information about the Southeast Missouri Council of Arts, visit their website at Cape Arts Council - Home.