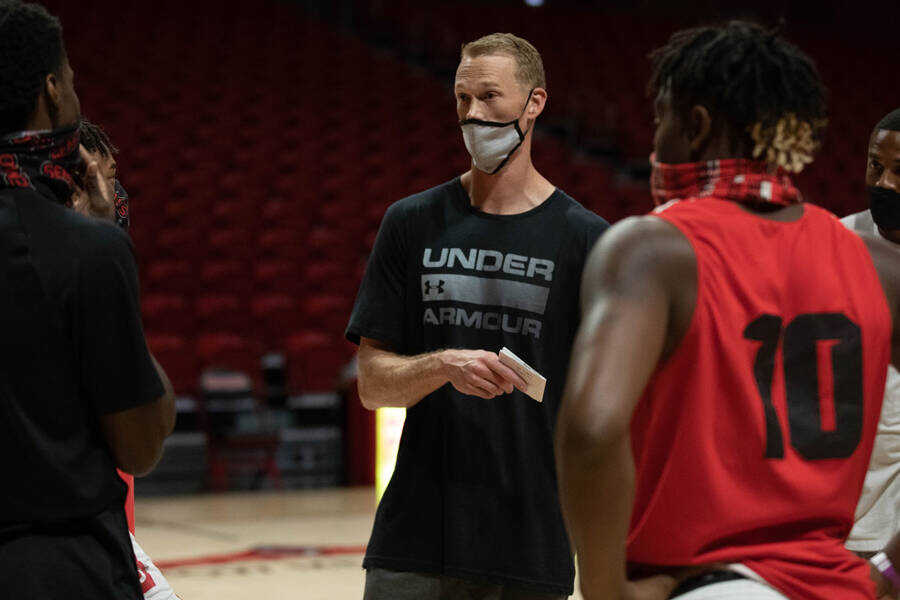 Head coach Brad Korn meets with his team during practice on Sept. 9 at the Show Me Center in Cape Girardeau, Missouri.
Photo by Jan Salmon

Turnover is one word that could be used to describe the upcoming men’s basketball season.

No, not turnovers on the court, but rather the roster turnover that took place off the court. The team will return seven players from last season, and the only coach returning on the staff is Keith Pickens.

Offensively last season, the Redhawks scored 66.3 PPG which put them at 11th out of 12 teams in the OVC. The Redhawks also allowed 74.4 PPG on defense a season ago, ranking them 10th in the OVC.

Brad Korn, who was hired as head coach in April, said assistant coach Sam McMahon watched old film and said Southeast would have improved their conference record if they had just gotten one more defensive stop a game.

“It goes to show the fine line between winning and losing and how close you can be,” Korn said.

The Redhawks will get a boost to their scoring as redshirt-junior guard Chris Harris is returning from a knee injury he suffered after just two games a season ago.

Harris averaged 15.5 PPG in the two games he played and is a welcomed sight in the Southeast offense.

Southeast finished 10th in the OVC in three-point shooting where they shot the three at a 32% clip. The Murray State Racers led the OVC with a three-point percentage of 36.9%.

The Redhawks lost guard Alex Caldwell, forward Sage Tolbert and guard Skyler Hogan in the offseason. The trio rounded out the top four leading scorers for the Redhawks last season.

While the Redhawks lost big pieces of their scoring, they added six new players to their roster, including guards Parker Long, Dylan Branson and Eric Reed Jr and forwards Manny Patterson, Nate Johnson and Nolan Taylor.

Korn said it’s important to find a good balance of both when it comes to focusing on the defensive and offensive end.

Early on, Korn said the message to the team has been about doing what you do really well.

“[We’re] always making the extra pass, good shot versus great shot, [and] doing what you’re doing and then doing it really, really well,” Korn said. “That’s been the message to try to keep it as clear and as consistent as possible, especially early-on to cut back on some of that confusion.”

The focus early-on in practices has been about the little things it takes to be successful.

“Working guys back into basketball shape has probably been more of an area of focus,” Korn said. “There’s a sense of urgency because it’s right around the corner.”

Korn said the Redhawks will primarily be a man-to-man team defensive team, but the decision to drop back into a zone defense could be made depending on certain matchups.

The Redhawks have also been focusing on improving each day in every area of their games.

The Redhawks are hoping to improve heading into this season and are hopeful the season will tip-off in late November.