Women’s basketball relies on experience in preparation for season 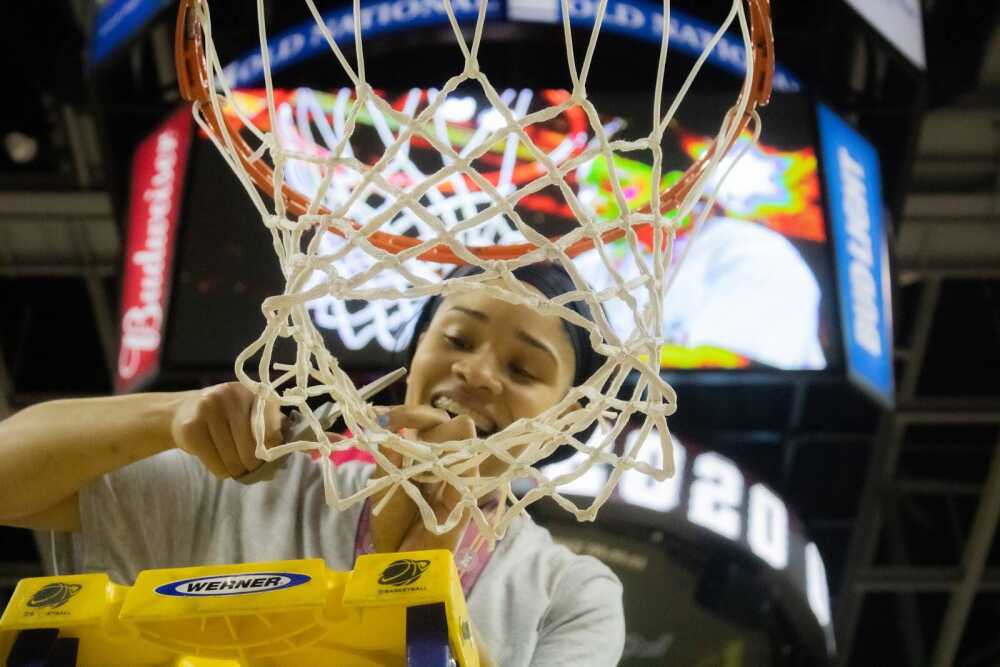 Senior guard Tesia Thompson cuts down the net after the Redhawks 67-47 win over the University of Tennessee Martin Skyhawks in the Ohio Valley Conference Tournament Championship on March 7 in Evansville, Indiana.
Photo by Ramond Buck

The Southeast women’s basketball team won the Ohio Valley Conference Tournament Championship over University of Tennessee Martin in the 2019-2020 season. They have eight returning players from last year’s championship season to guide the newcomers in the right direction during their shorter-than-usual training period.

“I think our ‘coachability’ has been really good,” Patterson said. “I think our returners are showing our newcomers how we practice. The pace, intensity, effort, focus that is required. They are doing their best to display in practice the ‘SEMO way’ — which is extremely hard, extremely tough and together.”

Carrie Shephard, Jessie Harshberger, Jocelyn Taylor, Iyanna McCurdy and Denisha Gardener are among the players that graduated and will not be returning after their championship season.

Patterson said the team “lost a lot of experience and leadership” but she is not expecting anyone to be like “what we lost.” In other words, she only wants her and her players to figure out how each person can become their “best self.”

The Redhawks ranked first in the OVC in PPG last season, averaging 74.5. Patterson is confident in her guards, like Taelour Pruitt and Tesia Thompson, in continuing a high-scoring average with the help of their surrounding players.

“I think our guard play is going to be good this year, as good as it was last year,” Patterson said. “I think they are going to create a lot of scoring opportunities in transition, from our defense and our half court set. I think the players that we have surrounded them with have the ability to catch and finish.”

The Redhawks ranked fifth in defensive points allowed and eighth in three-point field goal percentage defense last season. Protecting the three and using increased athleticism throughout the team will be key in the Redhawks’ defensive game.

As COVID has put a halt on some team bonding and practices, Patterson said she is excited for the upcoming season, seeing the growth from her players and being able to get on the court everyday. Team practices have been missed by Patterson, and there is an “excitement” in getting on the court because they have not been able to be together in so long.

“It’s always exciting to see a group come together, bond and form into one,” Patterson said. “I like our individual pieces, and now it’s about them melting into one healthy heartbeat and playing as one.”

Thompson said listening, not quitting and “showing them what effort looks like here” are important parts for the newcomers’ development and playing the SEMO way.

“Sometimes, you don’t learn as much in high school as you do in the upper level,” Thompson said. “Things are going to get hard, and it’s going to be tough. Here at SEMO, we do not allow quitters.”

Although things are still being worked out on the court, Thompson said the early connection the Redhawk women’s basketball team made has helped the transition to COVID-19 rules. This made things easier in helping them “jell together” and feel like a family.

The Redhawks begin their season in November.