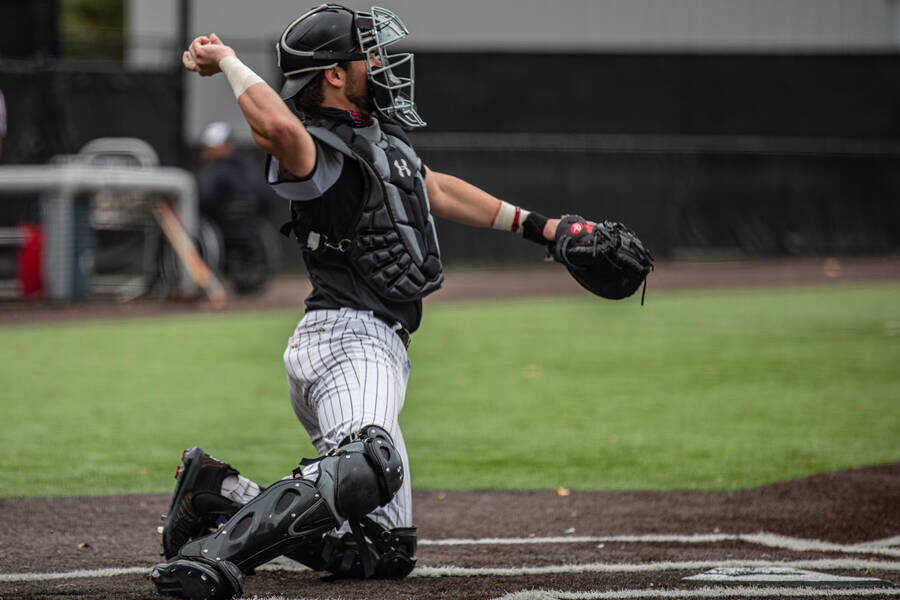 Sophomore Andrew Keck throws the ball back to the pitcher during game two of the Redhawks World Series on Oct. 24, 2020.
Photo by Jan Salmon

Redhawk baseball’s sophomore catcher Andrew Keck is influenced by “going about every day like it could be your last.”

As a freshman in the 2019 season, Keck was “thrown into” an unexpected playing situation when starting catcher Wade Stauss was sidelined by an injury.

“I kind of got thrown into something and played a lot more than I thought I was going to,” Keck said. “I definitely didn’t play like I wanted to or how I thought I could, but I think that has helped me in the long run and has put me in the spot where I am at right now.”

During his freshman season, Keck started 44 games and recorded 20 runs, 39 hits (including three home runs), 25 RBIs (runs batted in) and a .392 slugging percentage, making him second on the team in that category.

The unexpected year of in-game experience during his freshman season set him up for success in the shortened 2020 season. Keck started in all 17 games that were played. He was third in batting average (.400), second in RBIs (19), had 28 total hits and also posted a .463 on base percentage.

Being prepared to fail is a step you have to take in being comfortable at the plate, Keck said.

Separating his defensive and offensive game was not always the easiest task for Keck, but he soon learned how to maintain his mental approach by focusing on the next task at hand.

Keck only recorded one error in his 2019 debut, leaving him with a .997 fielding percentage. There were three stolen base attempts against Keck behind the plate in the 2020 season; Keck caught all three stealing.

Due to the pandemic, some players were allowed the ability to return to finish their final season of eligibility. Keck said having that extra experience on and off the field will help lead the newcomers on the team.

After going through the practices in the fall, Keck said the team “figured things out” and is ready for the upcoming 2021 season.

“It’s exciting to have extra guys because it opens up more opportunities for success for the team,” Keck said.

The 2021 baseball schedule has not yet been announced, but the team members hope to begin in the spring.