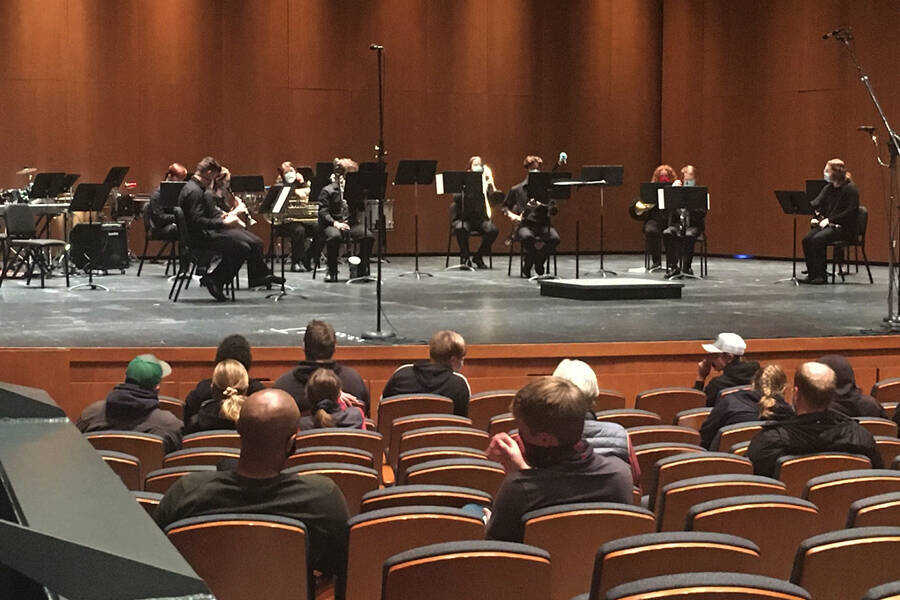 Minutes before the show started, the audience waits while the performers practice before they play.
Photo by Josh Seabaugh

Attending an orchestra can be soothing. The dark lighting of the setting, the sound of the instruments being professionally played, and the sight of performers putting their heart into something they love.

The symphony lasted around 45 minutes. Southeast junior Anthony Kandilaroff was one of the flutists who performed. He said the symphony was revised to accommodate safety concerns regarding Covid-19.

“Tonight was supposed to be a quick to-the-point concert, given Covid standards,” Kandilaroff said. “That’s why we were in smaller groups.”

The performers followed social distancing guidelines as they played their instruments. After each song, the performers would step off stage while assistants would come out and sanitize their musical sheet stands.

Music played during the concert ranged from centuries-old tracks from the 1800s to newer themes. Fan-favorite music included the theme from the Harry Potter movie series and “This Is Halloween” from “The Nightmare Before Christmas.”

Southeast sophomore Cameron Thompson said he enjoyed the final, flute piece the most.

“I liked how the flutes played different Halloween songs,” Thompson said. “It was an overall great performance and I would recommend it to anyone.”

The Wind Symphony’s next performance is Nov. 17. The seasonal concert will begin at 7:30 p.m. and performed at the Academic Hall on the main campus. Tickets can be purchased on the River Campus website or be purchased at the doors.