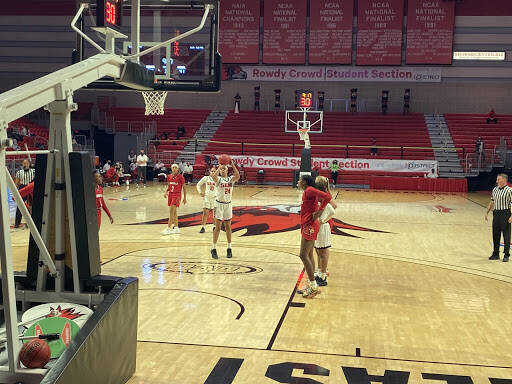 Senior guard Tesia Thompson shoots a free throw during the Redhawks 74-53 loss to the Louisville Cardinals.
Photo by Clay Herrell

Southeast women’s basketball fell to the fifth ranked Louisville Cardinals 74-53 on Nov. 25 at the Show Me Center in Cape Girardeau, Missouri.

Southeast played the Cardinals tough in the first quarter as Louisville held an 18-16 lead after one quarter of play.

Coming out of halftime the Redhawks trailed the Cardinals 38-24, but Southeast responded early in the half with a 15-7 run to cut the Louisville lead to 45-39.

That would be as close as the Redhawks would get in the second half as Louisville ended the third quarter on an 11-2 run.

Southeast coach Rekha Patterson said she was happy with the fight her team showed in the second half.

“I was proud of how we were able to bounce back and figure out how to get competitive in the third quarter,” Patterson said.

Leading the way for Southeast was senior guard Tesia Thompson who tallied a game high 21 points on 6-for-16 shooting. Thompson credited the physicality of Louisville as a reason for some of her missed shots near the basket

Thompson said she felt like the Redhawks became frustrated late in the third quarter and the early minutes of the fourth quarter as Southeast couldn’t cut the lead to under six.

“I think that’s when the frustration came because we were all thinking ‘Oh we can really do this’,” Thompson said.

“I thought some of my layups were pretty strong because I was going in aggressive because they were aggressive,” Thompson said. “I thought I could have [taken] a little bit off of my layups.”

Thompson said she was pleased with the effort from Southeast considering the lack of practices they’ve had.

“We have a lot of new players and then we didn’t get our summer that we have to work on stuff,” Thompson said. “The practices were a little sloppy here and there but I really thought today was very impressive.”

Southeast racked up 22 fouls with freshman forward Nyrobi Pillers and redshirt-senior forward Latrese Saine both fouling out of the ballgame.

Patterson said some of those fouls came due to the Redhawks missing rotations defensively.

“They’re bigger, faster [and] stronger and we were slow to stuff, slow to rotate over, or we got a little undisciplined and came down instead of just having our hands straight up,” Patterson said. “Those are all things we can fix and hopefully we fix them soon.”

Patterson said the message in the locker room following the loss was letting the team know how proud she was of them and their growth.

“Three years ago we got beat by 40 [and] it wasn’t even close,” Patterson said. “That shows growth with those players that were here then and then the new players that are in that locker room.”

The loss moved the Redhawks to 0-1 to start the season.

The Redhawks will be back in action on Tuesday, Dec. 1 when they take on the University of Health Sciences and Pharmacy at the Show Me Center in Cape Girardeau.