Redhawks come up short in overtime loss to Salukis 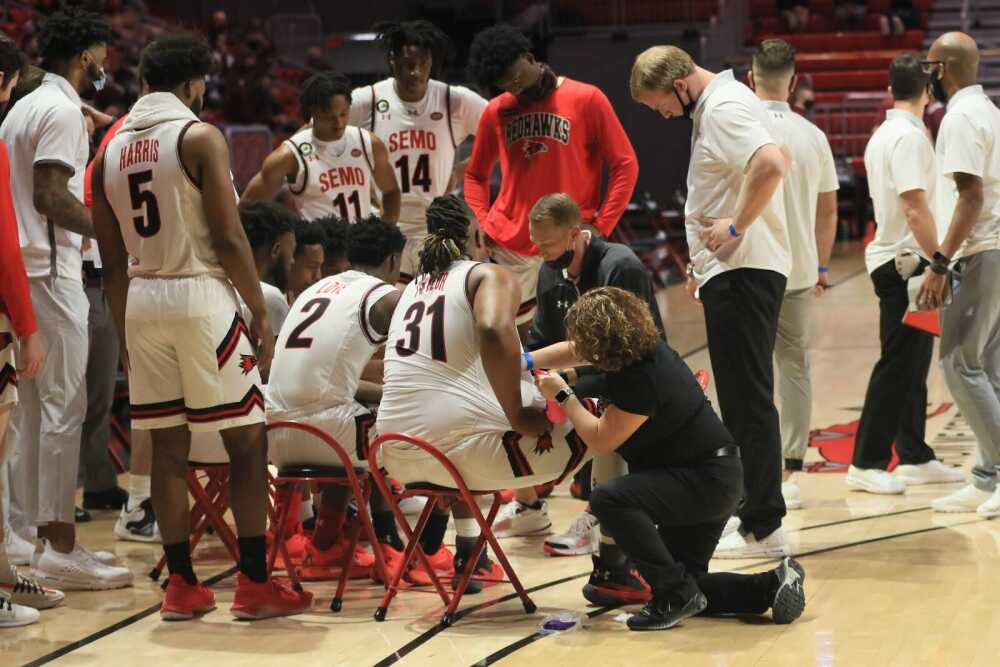 Brad Korn instructs his team during a timeout in Southeast’s 87-79 overtime loss to Southern Illinois on Dec. 2 at the Show Me Center in Cape Girardeau.
Photo courtesy of Southeast Missouri State Athletics

The lack of offense at the beginning of overtime proved detrimental to the Redhawks in Southeast’s 87-79 loss to Southern Illinois on Dec. 2 at the Show Me Center in Cape Girardeau.

The Redhawks had a 65-54 lead with just over six minutes left in the second half before the Salukis went on a 17-6 run to force overtime.

Southeast coach Brad Korn said moving forward the Redhawks need to execute the game plan for the entirety of the game.

“It’s execution because we had talked about it for the two days leading up to this,” Korn said. “I didn’t think we did a very good job of having that discipline and the execution that we needed.”

Despite Domask’s big second half, the Redhawks held him to only six points in the first. Southeast junior guard Eric Reed Jr. said forcing Domask to the baseline was the key to slowing him down early.

The Redhawks had four scorers in double figures but were led by Reed who scored 17 points on 6-for-10 shooting.

Reed said the culture around the program has changed.

“We got guys who really bought in and want to win,” Reed said. “You can’t go wrong with that [and] if you play hard every night you can’t be upset with that.”

Junior guard Nygal Russell shot 0-for-6 from the floor but pulled in 11 rebounds and posted a block and a steal. Korn said he kept reminding Russell during timeouts that he was still having a big impact on the game.

“There’s so many ways that you can impact the game other than scoring,” Korn said. “It’s hard always fighting that battle so I just tried to praise Nygal as much as I could.”

Korn said one thing he has learned through two games is that he and his staff are still learning the team.

Korn had high praise for redshirt senior forward Nolan Taylor and the success he has finishing around the rim.

“He’s very very smart. [has] good footwork, and I have to give him a lot of credit for what he’s been able to do from the time that he got here until now,” Korn said. “He’s coming off of an injury, he’s put in a lot of work to get his body into shape to where he can play up and down [with] the minutes that he’s playing so I think he’ll continue to do that.”

The loss moved the Redhawks to 1-1 on the season and Southeast will be back in action on Dec. 7 at 6:30 when they host Lipscomb at the Show Me Center in Cape Girardeau.