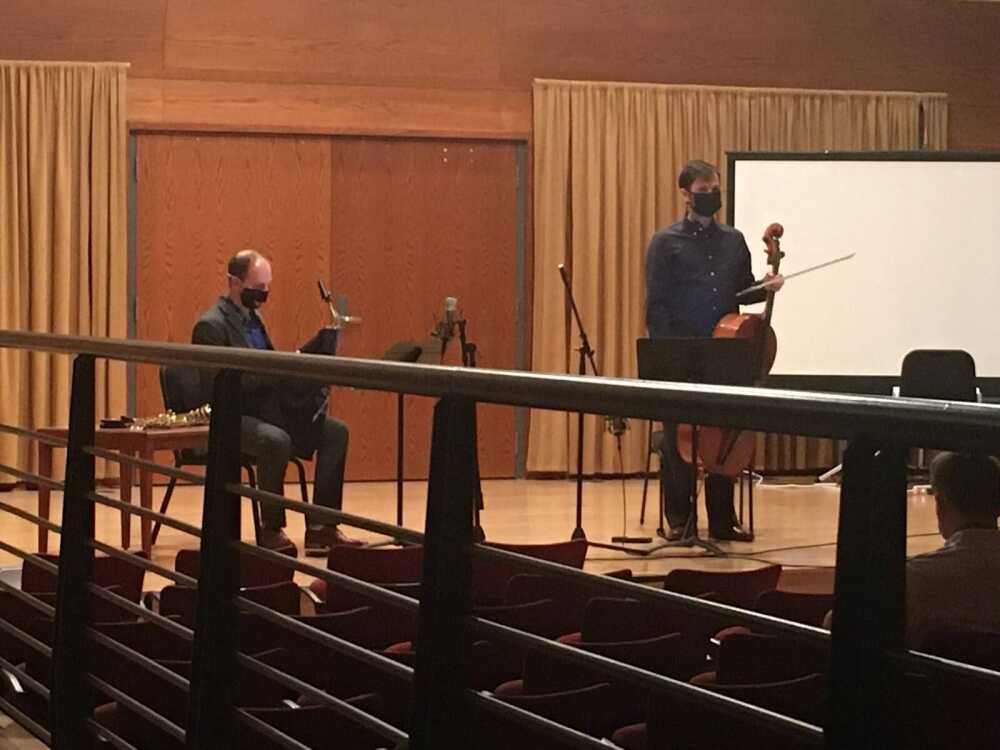 Daniel Ketter (right), one-half of the new cello and saxophone duo Cellax, addresses the crowd after playing their first piece, “Suite Off Pist” by Svante Henryson. Ketter and Zach Stern (left) performed together publicly for the first time Nov. 16 at the River Campus.
Photo by Josh Seabaugh

Cellax, which comes from the combination of the words “cello” and “sax,” has Dr. Daniel Ketter on cello and Dr. Zach Stern on saxophone. On Nov. 16, Ketter and Stern played at a sold-out show full of students, faculty and fans of instrumental music.

The two musicians played pieces from around the world, including music by Edison Denisov and Libby Larsen. They played a total of five pieces, beginning with “Suite Off Pist” and ending with “Disco Toccata.”

Stern is a music instructor at Southeast who teaches saxophone master classes. After the performance, Stern said he enjoyed the way it went.

“We were certainly happy with the turnout,” Stern said. “Our primary goal was to have a good time, and we did. It's very difficult to give a perfect performance, so there were still some mistakes.”

Tickets were sold in advance, which led to a sold-out performance.

Ketter is an assistant professor of cello at Missouri State University (MSU). He and Stern met each other while pursuing their doctorates at the Eastman School of Music in Rochester, New York. While this was their first performance together, Ketter said it went well, and he was grateful for Southeast.

“I was so thankful to the SEMO community to see an energetic, positive crowd ready to cellax with us,” Ketter said. “The most important thing to me in a concert is that the audience has a good time, and I think that we definitely succeeded with this unique program.”

As for the future of Cellax, both performers have said they plan to play the same program in the future. Stern said they have plans to play at MSU.