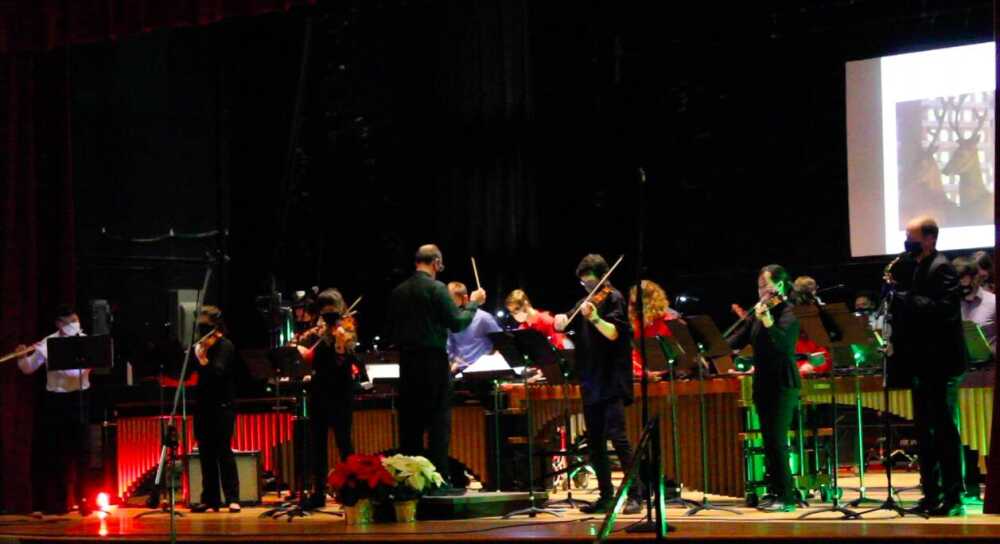 The Percussion Ensemble performs at the 13th annual Family Holiday Concert at Academic Hall Auditorium on Saturday, Nov. 21, 2020. The annual concert was accompanied by a reading of the poem “The Night Before Christmas” as well as video projections, and rice shakers were available for purchase to play along with select songs.
Photo by Brooke Holford

The Department of Music held the annual holiday concert in the Academic Hall Auditorium on Saturday, Nov. 21, with performances at 10:30 a.m. and 2 p.m.

Director Shane Mizicko, associate professor of music, said he created the concert for families with young children, so the music is “fast-paced and upbeat,” and the concert typically doesn’t last longer than 45 minutes.

“The Family Holiday Concert is geared toward young children but not produced by young children,” Mizicko said. “It’s something children can go to and enjoy and have a professional experience, but also where the parents don’t have to worry so much if their child happens to scream in the middle of the performance or something like that, so it’s kind of a learning experience.”

Featured musical selections included “Frosty the Snowman,” “Carol of the Bells,” “We Three Kings,” “God Rest Ye Merry Gentlemen” and a unique version of the traditional “Jingle Bells.” Mizicko said video projections were included to provide a visual element to holiday classics such as “Rudolph the Red-Nosed Reindeer” and “The Polar Express,” and rice shakers were available for purchase to play along with songs such as “Patapan” and “We Three Kings.”

The concert was accompanied by a reading of the poem “The Night Before Christmas” by Timothy Schmidt, professor of vocal music.

The concert is an opportunity for students to learn fun music and enjoy their time playing together rather than being stressed out like they are for larger productions, Mizicko said.

Southeast Junior Emily Bloodworth, a double major in English writing and English education, was invited to play in the holiday concert her freshman year because she was in the drumline of Southeast’s marching band. She has participated in the concert every year since.

“This is my third year playing in this concert, and I really love it,” Bloodworth said. “I think it’s a great community outreach time because it’s great for kids and families, and it gets everybody in the Christmas spirit.”

The concert was moved from the Donald C. Bedell Performance Hall to the Academic Hall Auditorium due to the coronavirus pandemic.

Mizicko said this proved to be a bit of a challenge for a variety of reasons: the Academic Hall Auditorium isn’t used for musical performances anymore and hasn’t been for approximately 14 years, so there are fewer lights and limited microphones. In the performance hall at River Campus, all the instruments are right down the hallway, Mizicko said, so the instruments had to be transported to Academic Hall.

However, Mizicko made it work with the help of some members of Facilities Management.

“We just had to haul all the instruments here,” Mizicko said. “It took over four hours, a box truck and four guys to load and unload just nonstop, and then we spent another two hours of unloading and unpacking while setting up.”

Mizicko said he started this annual concert 13 years ago when he was looking for a professional holiday concert to take his own children to and realized there wasn’t one like that in the area.

When Mizicko first started the event, his two children were one and a half years old and 4 years old. His son is now a junior in high school, and he played in this year’s concert.

Administrative Assistant in the Department of Mass Media Bonnie Gerecke attended the concert with her grandchildren, as she has every year for the past 10 years. Her grandchildren are 10 and 12 years old now, and she said the concert has become a part of their family holiday traditions.

“I really enjoy that we have a number of community members that have a family tradition to come back every year with their kids as they grow up,” Mizicko said. “Seeing that the community still seems like they want these types of concerts after all this time and my students enjoy doing it — it’s fun music that they don’t always get to do when they’re studying music seriously — is probably the most rewarding part.”