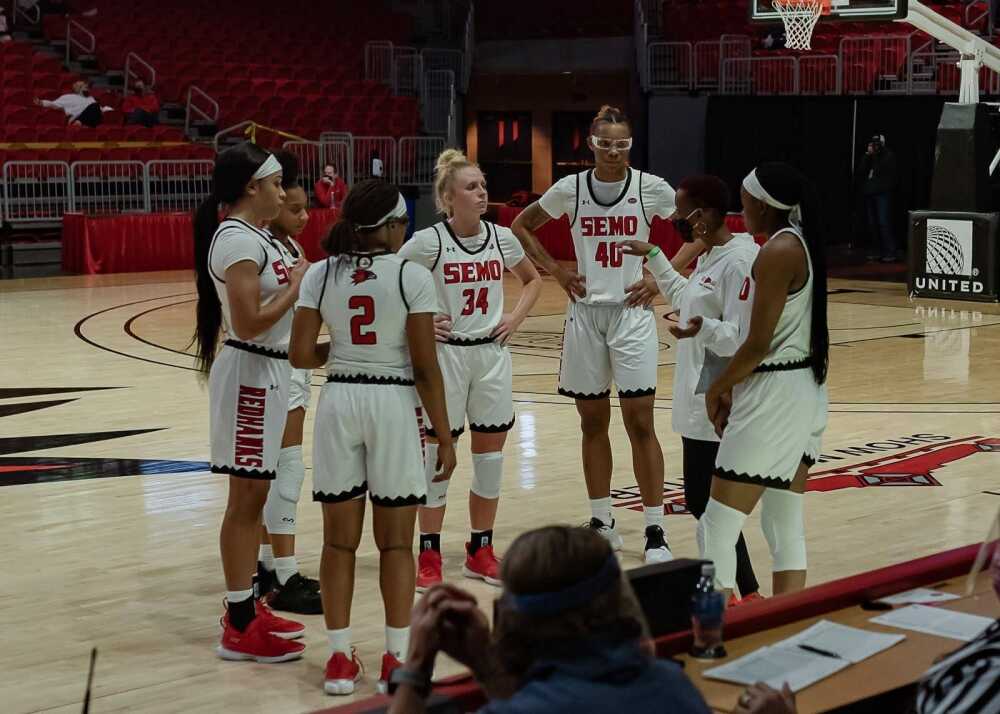 Coach Rekha Patterson talks with her team in a timeout during Southeast’s 74-61 win over Austin Peay on Jan. 16 at the Show Me Center in Cape Girardeau, Missouri.
Photo by Anna Estes

Southeast women’s basketball is in the midst of a stretch of games against fellow Ohio Valley Conference opponents. As it stands, the Redhawks are 7-4 overall and 5-1 in the OVC.

The Redhawks opened the season against the nationally-ranked Louisville Cardinals. Southeast coach Rekha Patterson said the team wanted to face Louisville to see where they were as a team after losing multiple players to graduation.

“We recruit young ladies who are competitive and [are] talented,” Patterson said. “They absolutely wanted a chance to play Louisville. I think they wanted to see what we had considering the fact we lost so much last year.”

Patterson said before Christmastime, she told the players to be ready to play whomever and whenever because they never know when games will be postponed.

“So we gotta focus on ourselves, focus on getting better everyday [and] fixing any of our weaknesses,” Patterson said.

The pace, tempo and intensity has Patterson happy with the way the Redhawks are practicing since returning from Christmas break. She also credits the players for getting up shots outside of practice to make sure they stay game-ready as well as helping build their confidence as the season progresses.

Redshirt senior forward Latrese Saine is an anchor for Southeast on the defensive end, but has also improved offensively. Saine averaged 4.8 PPG a year ago and is now averaging 10.1 PPG in 11 games this season. Patterson says the area she’s seen the most improvement in is her confidence with the ball.

“She’s catching ready to be aggressive, to score or shoot,” Patterson said. “Her turnovers have gone down because of that. Her assist-to-turnover ratio is better this year than it has been because of her confidence.”

Saine broke the school’s all-time block record on Dec. 6 in a loss against Eastern Michigan when she posted five blocks in the game. The previous record was 115 held by Vera Roberts and Pam Iverson.

Patterson and the Redhawks have also seen Saine and sophomore guard Sophie Bussard be a viable second scoring option. Bussard is averaging 7.5 PPG through 11 games.

Patterson had high praise for Bussard, Saine and Pruitt and how they have stepped up their game.

“They were able to watch a lot of players do that last year, and now they’re just stepping up their game, which we felt like they were capable of doing,” Patterson said. “It’s really neat to see when a player starts to turn a corner.”

As the Redhawks get deeper into conference play and the conference tournament approaches, Patterson said the team needs to improve their rebounding numbers and their assist-to-turnover ratio.

The Redhawks are back in action Jan. 21 when they travel to Morehead, Kentucky to take on the Morehead State Eagles at 3 p.m.