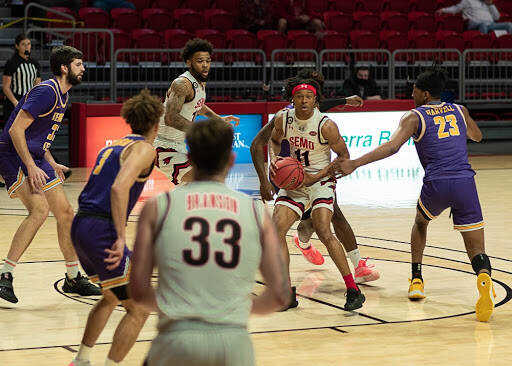 Sophomore guard DQ Nicholas makes a pass to an open Dylan Branson during Southeast's 68-64 win over Tennessee Tech on Feb. 4 at the Show Me Center in Cape Girardeau.
Photo by Anna Estes

Missed free throws were the name of the game against Jacksonville State University (JSU) in Saturday evening's 66-54 loss. The Redhawks shot 13-for-26 from the free-throw line and missed a couple of layups leading to empty possessions.

Southeast coach Brad Korn talked about how the combinations of the two will lead to a good team capitalizing on the other end.

“You’re just kind of waiting for the other team to capitalize and to their credit they did,” Korn said.

JSU was led by junior guard Jalen Finch who scored 16 points shooting 7-for-12 from the floor and 2-for-3 from the free-throw line. Finch also added eight rebounds, seven assists, three blocks, and a steal to the stat line.

SEMO was led by sophomore D.Q. Nicholas who had 13 points going 5-for-9 from the floor and 2-for-5 from the free-throw line. Nicholas also hauled in four rebounds and added an assist to his stat line.

The Redhawks led 29-28 at the half, but a slow start to the second half cost them down the stretch.

Junior Eric Reed JR. went 3-for-3 from beyond the arc and led SEMO with nine points going into the half.

Korn said that they talked about just how important the first five minutes in the second half would be at halftime.

However, the Redhawks only turned the ball over four times in the second half compared to the eight that they had in the first half.

Korn said that his team was not there mentally at the free-throw line and how the missed free throws let the air out of the balloon for them in the second half.

The Redhawks have a break as they do not play again till Thursday, Feb. 11th at Murray State University.

Korn said that this would be a great time for his team to mentally reset and be able to focus on the last six games of the season and how it is at a really good time.

“I think it is huge for us. Take a couple days off, take tomorrow off for sure,” Korn said. “I think that’s good anytime you can take that weekend off you know, no class, none of that stuff. You get your rehab and your stretching in. I think it is coming at a really good time for us because this is a tough stretch coming up. Six left and we are hoping all in a row.”

With the loss, the Redhawks fall to 7-12 on the year and 5-8 in the Ohio Valley Conference.