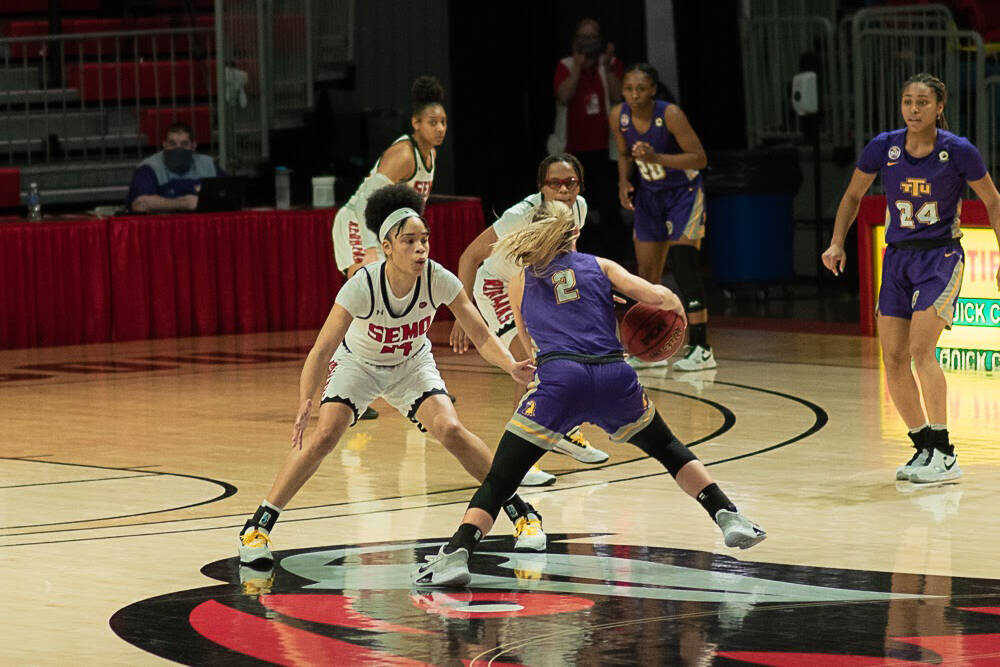 Senior guard Tesia Thompson guards the ball during Southeast's 59-55 win over Tennessee Tech on Feb. 4 at the Show Me Center in Cape Girardeau.
Photo by Anna Estes

A strong game from senior Tesia Thompson led the Redhawks to the win. Thompson accumulated a double-double, scoring 26 points and bringing down 14 rebounds while shooting 11 of 22 from the field. Thompson started the game off fast, scoring 17 of her points in the first two quarters.

“It feels great because in our last game against Tennessee Tech I couldn’t make anything, so to come out and redeem myself feels great,” Thompson said.

The Redhawks defense is another reason they were able to secure the victory. SEMO held the Gamecocks to just 29% shooting from the field and 11% shooting from the three-point line. Sophomore Sophie Bussard and junior Taelour Pruitt each had three steals while redshirt senior Latrese Saine led the team with six blocks.

“I was really proud of how we battled,” Redhawks coach Rekha Patterson said. “We didn’t let our inability to score in the fourth quarter hurt our defense, we dug in and said if we’re not scoring you’re not scoring either.”

The game did get close a few times in the second half when Jacksonville State cut the lead to two points in the third quarter. SEMO was able to hold off the Gamecocks and continue to hang on to the lead throughout.

“I reminded the team of what we’re supposed to do on defense, I ask what we want offensively,” Patterson said, “Because if they know what they need to do they can go out there and do it.”

Every Redhawk who stepped on to the floor got into the scoring column. Although the bench was short, with only four players coming into the game, those players relieved the starters during foul trouble. Junior Nyrobi Pillers provided key minutes off the bench scoring seven points.

“I thought Nyrobi was really good today. When she took the ball to the basket pretty strong, that sort of flipped our aggressiveness when we needed it,” Patterson said.

This game was the first game that Taelour Pruitt played in since Jan. 9 due to a knee injury.

With the win today Southeast moves to 11-7 overall and 9-4 in the Ohio Valley Conference. Southeast is now two games back from the OVC leading University of Tennessee at Martin Skyhawks. The Redhawks will go on a three-game road trip starting with the Belmont Bruins on Feb. 9 at 5 p.m.