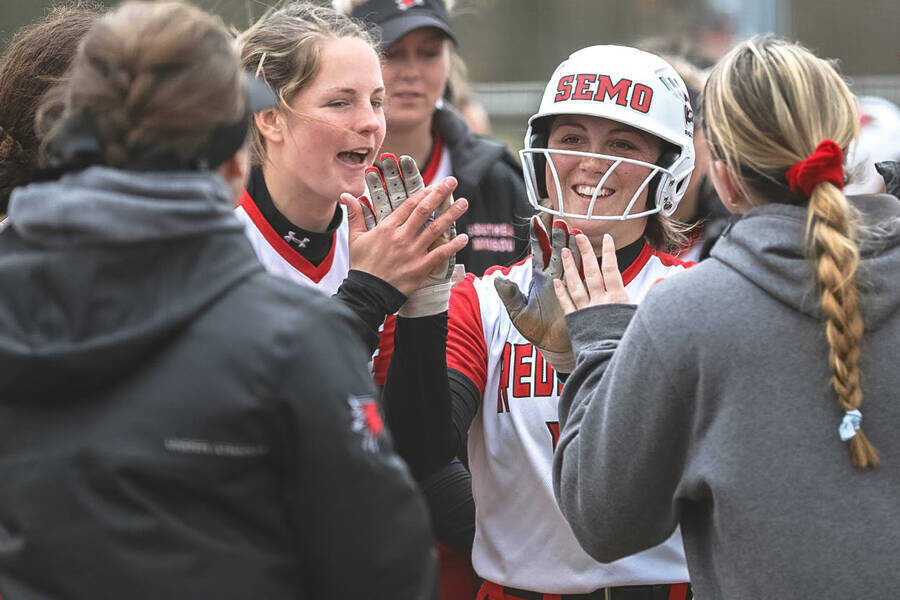 Junior Kaylee Anderson celebrates with teammates after hitting a home run against UMKC on March 1, 2020. This season, the Redhawks will take on four power-five conference schools all from the SEC.
Photo by Jan Salmon

The Southeast softball team is using a tough beginning to their schedule to prepare for conference play where the Redhawks will attempt to defend their 2019 Ohio Valley Conference Championship. With the pandemic allowing seniors to return for another year, the Redhawks are hoping to continue their success.

Head Coach Mark Redburn said with returning starters and plenty of depth this season, the Redhawks have big expectations to repeat as OVC Tournament Champions.

“I think if everything stays true and we stay healthy, I’ve got high expectations for us to compete for the regular-season title, as well as the tournament championship,” Redburn said.

The team opens the season Feb. 13 in a three-game series at Auburn University before playing at the University of Tennessee on Feb. 20.

The Redhawks believe playing schools in a power-five conference will pay off once conference play begins.

“It’s going to be really beneficial for us,” Junior pitcher Rachel Rook said. “Seeing that kind of competition before getting into conference play will make us a better team.”

The Redhawks will open conference play on March 6-7 when they host Austin Peay for a three-game set.

SEMO brought in 11 freshmen this season along with a sophomore transfer, Alyson Tucker. The addition of freshman outfielder Jillian Anderson brings the total number of Andersons on the team to three with Rachel and Kaylee. They all play the outfield and are not related to each other.

“These players will certainly add to our depth; it’ll be fun and exciting to watch those newcomers this year,” Redburn said.

The 2020 team had a record of 12-5 before their season was brought to an abrupt end due to the COVID-19 pandemic. The NCAA gave spring athletes an extra year of eligibility, allowing SEMO to return three seniors for this season. Although it has been almost a year since the Redhawks have been on the diamond, Rook said the team has been working hard during their off-season.

“I think [COVID-19] affected us positively because now we have to work harder on and off the field to stay healthy,” Rook said. “It helped with our dedication this season because now it’s not just about softball; there’s a lot more into it this year.”

In the 17 games the Redhawks played in 2020, now-senior outfielder Rachel Anderson posted a .480 batting average with three home runs and 15 RBIs.

Senior infielder Ashley Ellis was top 30 in the nation in home runs when the season was cut short. Ellis had eight home runs to go along with a .347 batting average and 21 RBIs, which was a team-high.

Southeast will begin their 49-game regular season with a 10-game road trip starting at Auburn on Feb. 13 at noon.