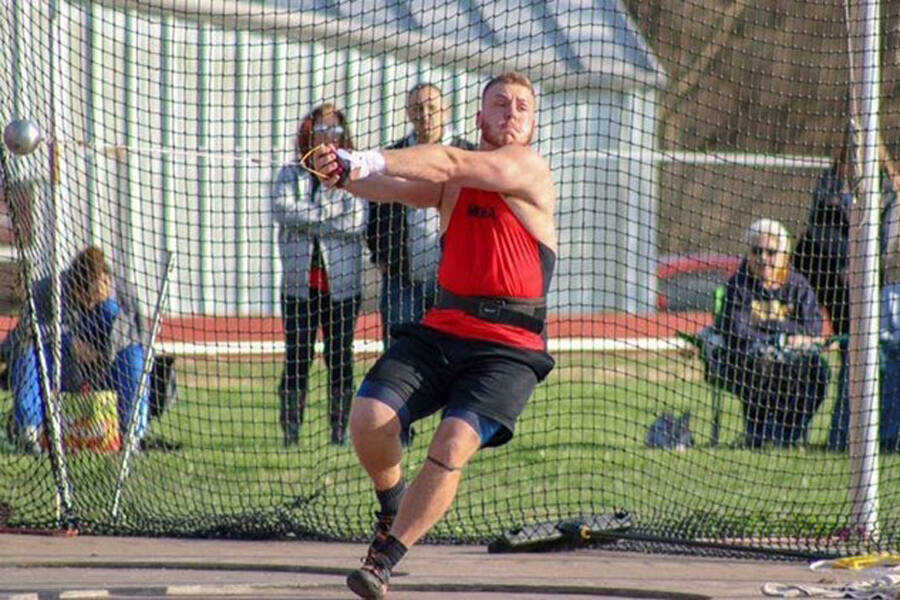 Pandemic restrictions and untimely injuries that halted training have left track and field hammer thrower Logan Blomquist with some uncertainties as he trains for the upcoming Olympic Trials.

Blomquist said multiple sporadic small injuries made it difficult to stay consistent with training. He said the downtime could affect his season and whether or not he throws far enough to make the Olympic trials.

In spite of this, Blomquist said he is putting his trust in God.

“I know the Lord. I know that he has a plan for me, and if that is going through a bunch of injuries before Olympic Trial year, then that's God’s plan,” Blomquist said. “I can fully trust him in that.”

The Olympics and the Olympic Trials are huge events in today’s world. Blomquist said he did not think he would make it this far. He credits a lot of who he is today to his high school coach, John Hamilton.

“[Hamilton] welcomed me into his family, had me over for dinner, and we really became like father and son. You know, he really opened a lot of doors for me,” Blomquist said. “He is one of the reasons why I did track and field. He told me that I would definitely be a D-1 hammer thrower one day while I was still in high school. His faith and hope for me kind of helped me.”

Hamilton, whom Blomquist mentioned is one of the best high school coaches in the US, also used to be a hammer thrower at Wichita State University, where he was top 20 in the nation in 1991-92.

Hamilton said Blomquist is like a member of their family, and he always knew he was going to be D-1 material.

“He has great feet. He's an extremely explosive, dynamic athlete that just doesn't have long levers,” Hamilton said. “I said all along that his best event in college would be the hammer throw, and as it turns out, that's been the case.”

Hamilton believes Blomquist will make it to the Olympic Trials.

To qualify for the Olympic Trials, Blomquist must throw an Olympic Qualifying standard, which is 72 meters, or place in the top 24 throwers in the U.S. Blomquist said he does not think all 24 people are going to hit the 72-meter mark, which gives him a fair chance.

“Most people usually throw somewhere in between 60 to 70 meters,” Blomquist said. “I have thrown 68 meters in practice this past fall, so if I can put the puzzle pieces together in the spring, I should make it to the trials.”

In competition, his personal record for hammer throw is 65.06 meters, between that 60- to 70-meter mark.

To better his chances of throwing further at trials and hopefully hitting the qualifying score of 72 meters, Blomquist says he is getting up earlier than he usually does.

“I try to get up by 8:50, which isn't super early. A lot of Olympic athletes get up even closer to six, but I find for me going to bed kind of late, getting up at 8:50 does it for me,” Blomquist said. “I also like starting my day with a bowl of oatmeal and some green tea, making sure I get plenty of fuel in my system for practice.”

Not only is he changing up his sleep schedule, he said he also must take a different approach to throwing. At the Olympic Trials, he will only get three throws. In regular meets, he is used to getting six.

Through all of this, Blomquist is maintaining a positive mindset.

“It's a big year for me. I’m coming off the biggest fall training in my life,” Blomquist said. “When I should be training the most, I'm not able to. Therefore, it makes things a little bit more difficult, but at the end day, it's all good.”