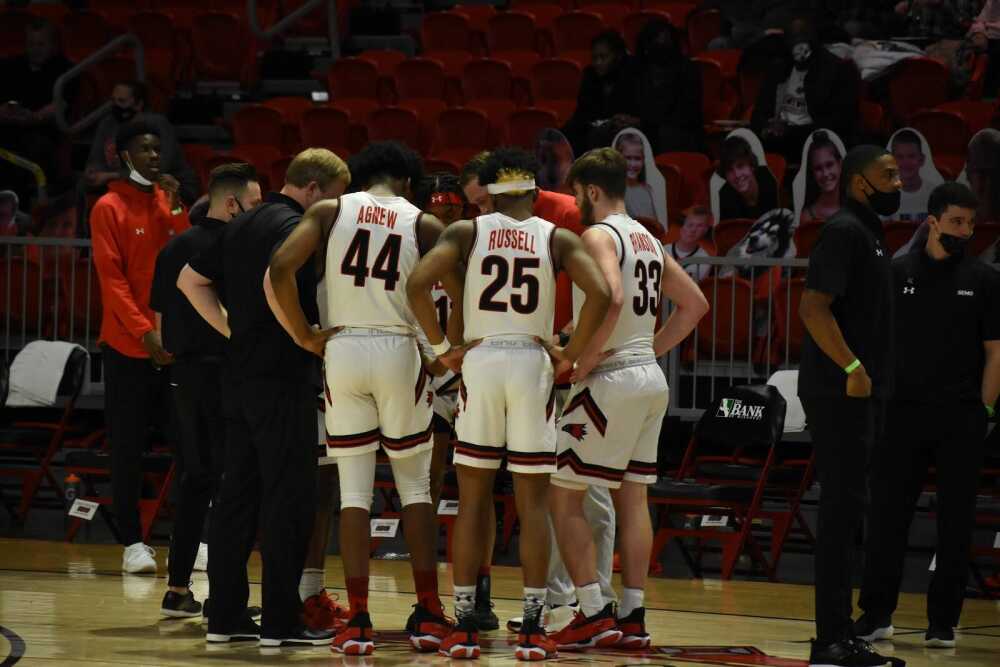 The Redhawks get instruction from Head Coach Brad Korn during Southeast's 94-72 win over Eastern Kentucky on Feb. 20 at the Show Me Center in Cape Girardeau.
Photo by Caleb Burris

“They were making shots, and we missed a couple assignments,” Akenten said. “It goes both ways; they made shots. [That’s] just basketball.”

Southeast coach Brad Korn said one of the big differences was on the offensive end for the Redhawks.

“We didn’t score the same way, we didn’t shoot the same way,” Korn said. “I think they made the adjustments, they pulled their press back a bit more.”

Redshirt junior guard Chris Harris led the Redhawks with 15 points on 4-for-10 shooting.

“We beat them by 30, and their confidence didn’t get shaken,” Korn said. “That type of stuff happens. We didn’t have it tonight, and that’s what happens, and we’ll be ready to go Thursday.”

The Colonels were paced by Wendell Green Jr. who rode an 18-point first half en route to a 23-point day. Green shot 7-for-18 from the field and 4-for-8 from behind the arc.

Korn said the Colonels played with a different energy than they did when the two teams met Feb. 20 at the Show Me Center.

The last lead change was with 12:58 to go in the first half when Wendell Green Jr. knocked down a three to give the Colonels a lead they wouldn’t relinquish.

Eastern Kentucky controlled the game in most categories as they outrebounded the Redhawks 39-30. They also shot a torrid 50.1% from the field.

The Redhawks held the advantage in points off turnovers, scoring 20 points off of 16 Eastern Kentucky turnovers. They also had 10 points off fastbreaks.

Korn said he and his players have appreciated the atmosphere the home crowd provided throughout the season.

“Going to Eastern Illinois and SIUE, there isn’t going to be much of an atmosphere,” Korn said. “For us to have it the way that we’ve had it all year long has been pretty remarkable.”

Southeast will look to earn a trip to the OVC Tournament that begins March 3 at the Ford Center in Evansville, Ind., with the upcoming two-game road trip.

The Redhawks open the road trip Feb. 25 when they travel to Charleston, Ill., to take on the Eastern Illinois Panthers at 7:30.