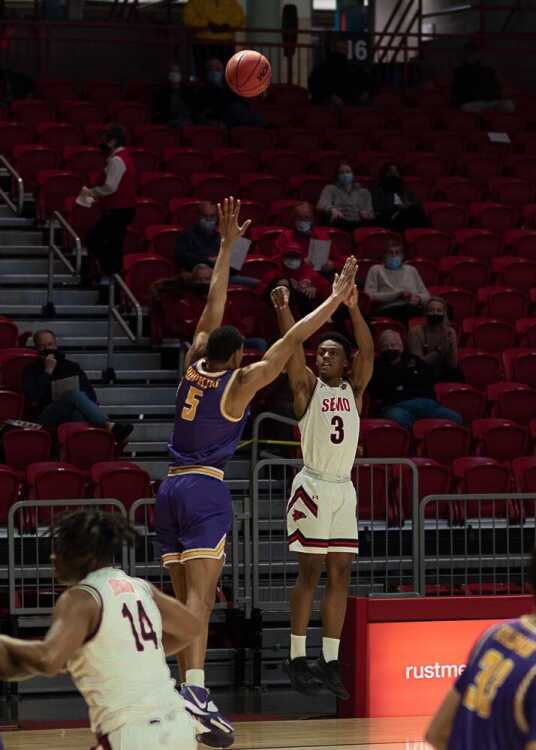 Junior guard Eric Reed Jr. takes a three-pointer during Southeast's 68-64 win over Tennessee Tech on Feb. 4 at the Show Me Center in Cape Girardeau.
Photo by Anna Estes

Junior guard Eric Reed Jr. has been a key piece for the Redhawks men’s basketball team during the 2020-21 campaign. Reed was named the Ohio Valley Conference Newcomer of the Week on Feb. 22. He averaged 19 points per game on 56% shooting from the field and 53.8% shooting from the three in the week span.

Reed transferred to Southeast this season after playing his first two seasons at Howard College, a junior college in Big Spring, Texas.

Reed said his mindset going into every game is on the defensive side of the ball.

Reed said the OVC Newcomer of the Week award means a lot to him, but his primary focus is strictly to go out and win.

Southeast coach Brad Korn said he has seen a lot of growth in Reed’s game since the start of the season.

“I think Eric has gotten better,” Korn said. “He’s gotten better as an individual [player], which obviously helps our team, just to be able to have him as a calming force. Anytime you have a guy shoot close to 50% from three, he’s always gonna help you in a ballgame.”

Reed is shooting the three at 44.9% on the season. He said a big reason for that success is the amount of time he puts in getting shots up from behind the arc following practice. Reed said he gets up 300 shots from three-point range every day.

Reed has scored in double figures for the Redhawks in three straight games, and he attributes that success to his ability of just letting the game come to him.

“In basketball, there’s a lot of good shots you can take,” Reed said. “When I’m open, I’ll shoot it, and if somebody closes out, I’ll take it to the rim.”

When his shots are falling at the rate they are this season, Reed said his confidence is high and credits his teammates for making the right plays. However, finding the confidence is something he had to learn over time.

“When I was younger, I wasn’t able to do as much as I should have because I always kind of yielded,” Reed said. “My people always were like, ‘You gotta be better, you gotta be ready.’”

Reed and the Redhawks can lock up a spot in the OVC Tournament with one more win. The Redhawks haven’t made the tournament since 2017. Southeast has two shots to win their way in beginning Feb. 25 when they travel to Charleston, Ill., to take on the Eastern Illinois Panthers at 7:30 p.m.