Artwork from visual window display provides look into the past 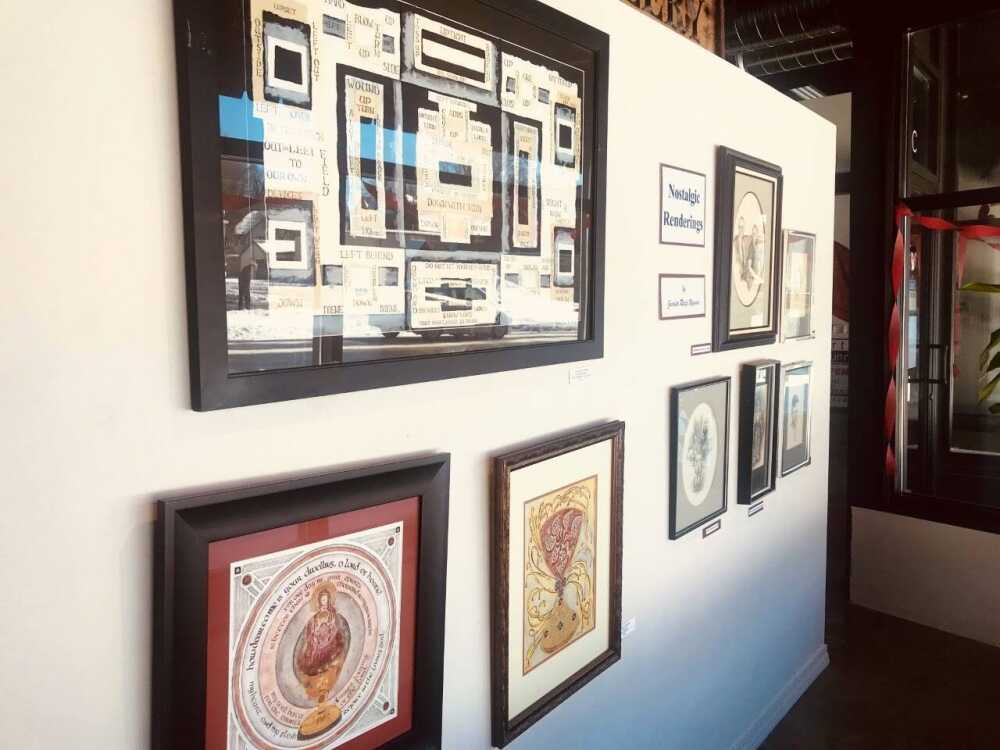 Robert Towner’s work is displayed in the Arts Council window in downtown Cape Girardeau. He is one of two artists with featured work in the month of February, both of whom have connections to Southeast Missouri State University.
Photo by Alisha Reisenbichler

On a tiny island in Scotland during the sixth century, monks copied the Gospel and created Celtic art. Nearly 1,500 years later, Robert Towner, a former world religions professor at Southeast, first found his artistic inspiration while living for a year on Iona, the same island the monks inhabited. Inspired by the history of his surroundings, it was there that Towner taught himself the art of calligraphy.

For the month of February, Towner’s work from this time period is on display in the window of the Arts Council of Southeast Missouri alongside Southeast graduate Juanita Wyman’s exhibit “Nostalgic Renderings.”

Towner said he wanted to expand his work after retiring from preaching in 2013, and his art turned into a combination of painting and calligraphy.

“There is color, and pictures and paintings are included in order to give flight to the meaning of words,” Towner said.

According to Towner, his life was grounded in teaching, preaching and celebrating the Word of God as he understood it. His calligraphy gives him an outlet to express this fascination and wonder.

One of his pieces in the window display represents the Holy Grail found in passages throughout the Bible, British romances and stories of King Arthur. Towner says the words spraying from the cup describe those associations with the chalice throughout history. Another piece shows a representation of this same cup becoming the throne of the Virgin Mary and Jesus Christ.

Towner’s third and largest piece on display is made with different colors of torn paper and plays with the idea of polarities with the use of calligraphy going up, down, right and left.

“The picture is about contradiction ... about all those things that when they get out of hand can tear people apart,” Towner said.

Towner said through these elements viewed together, the piece represents a cross.

The left side of the window display at the Arts Council shows Wyman’s detailed graphite pencil drawings. Like Towner’s inspiration from history, Wyman’s creations were prompted by her family’s past.

“My family and I pulled out photos that were not portraits … they were just candid shots that seemed to tell a story of who they were,” Wyman said. “It’s extremely different from anything I’m doing now … my work is not nearly as detailed as what it was back at that time [of ‘Nostalgic Renderings’].”

Wyman graduated with a Master’s in Art Education from Southeast Missouri State University in 1975, a time during which she focused on figurative drawing. Wyman said that for this visual window, she wanted to display something different than the artwork she currently creates. The pieces she completed towards the end of her degree are the ones she is currently exhibiting in the Arts Council window display.

One-piece consists of her brother with a “big old pair of hand-me-down trousers,” where the focus was centered on what he was wearing. According to Wyman, her emphasis with this collection of drawings was to see how detailed she could get with the pencil as she was honing her skills at the time.

Wyman said she now gets to practice what she preached when it comes to creating art. After retiring from teaching art for 30 years, her next goal was to loosen up in her work. Wyman currently creates landscapes with pastels. She draws inspiration from her European travels, her hometown of Ste. Genevieve, Mo., and the Midwest.

Through Towner and Wyman’s work, February’s visual window display provides a look into different understandings of the past. As members of the Visual Arts Cooperative Committee, each artist will continue to display a new piece of their work every month inside the gallery of the Arts Council of Southeast Missouri located on Spanish Street in downtown Cape Girardeau.