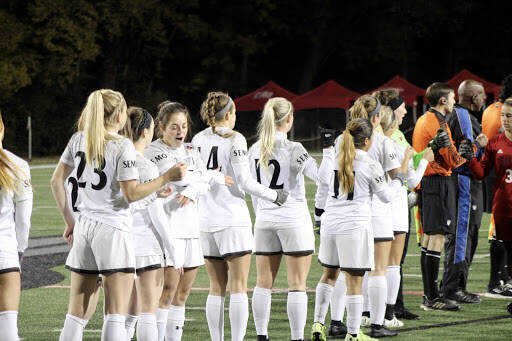 The Redhawks fist bump with the SIUE Cougars following the Redhawks 2-1 loss in the OVC Tournament on Nov. 8, 2019.
Photo by Jelani Days

It has been almost a year and a half since the Redhawks soccer team last took the field. The pandemic prevented the Ohio Valley Conference from having a Fall 2020 sports season, forcing them to move all seasons to the spring. Now after the long break, Southeast is ready to begin the 2021 season.

“[The OVC schedule] is my favorite part of the year because it means the most to us,” Nelson said. “The difference is, you’re looking at points with every game, so it’s definitely going to be interesting.”

The last time the Redhawks played was on Nov, 8, 2019 when their season ended in the OVC Tournament in a 2-1 loss to the fourth-seeded Southern Illinois University Edwardsville Cougars. In that game, then-sophomore goalkeeper Bailey Redden was unable to play due to receiving a red card in the previous game. Redshirt junior Kayla Bird, the team's backup, was also out because of a concussion. Junior outfielder Abby Rollet from the SEMO softball team played goalkeeper for the Redhawks, since she played goalkeeper in high school.

The team has seven newcomers this season, which makes up a third of the roster. Five freshmen, a redshirt freshman and a sophomore transfer are joining the ranks. With the long break, Nelson said there will be more first-game jitters than usual.

“We’re probably overexcited at this point that we are actually getting to play again,” Nelson said. “But once we get this game out of the way, we’ll get back to work more focused.”

Senior midfielder Hannah Compernolle said she is looking forward to playing, and the whole team is excited. Because it is Compernolle’s senior season, she said she is just glad to have the opportunity for a season at all.

“I’m just so grateful that we get to have a season; I was worried we may not get one,” Compernolle said. “I’m happy to be playing with my fellow seniors, even though it’s only 10 games. I’m looking forward to everything.”

Fans will have limited opportunities to see the Redhawks play, as only five games are at home. The Redhawks open their season Friday, March 5, at 7 p.m. against the Jacksonville State Gamecocks at Houck Field in Cape Girardeau.