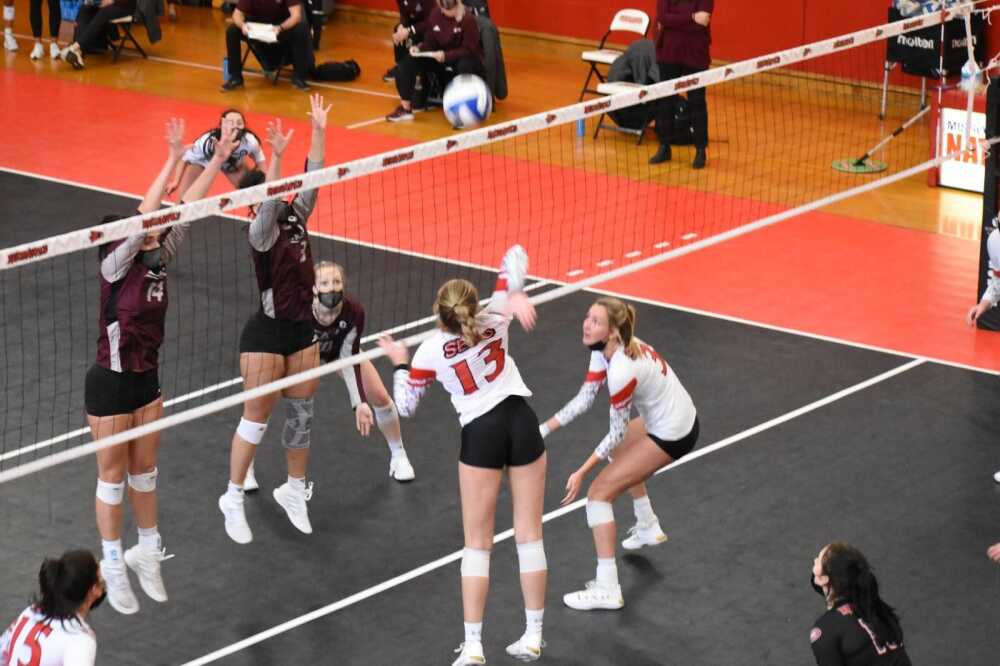 Freshman outside hitter Kayla Closset attacks the ball during a pair of four-set wins for Southeast over EKU on Feb. 14 at Houck Field House in Cape Girardeau.
Photo by Caleb Burris

Southeast defeated Austin Peay 3-2 in five sets on March 15. This win for the Redhawks makes ten in a row. Yankus says her team’s hard work and open-mindedness to adjustments has played a huge role in this streak.

This is the first time all season Southeast went to five sets. Every previous game was settled in four or less.

Redhawks coach Julie Yankus said fifth sets are always “tough and emotional,” and she believes a good effort from Austin Peay is what sent five sets.

“Austin Peay is a good team, and they really challenged us today,” Yankus said. “They played really scrappy defense, making our hitters work hard for every point that we could get.”

“I think it’s going to prepare us further down in the Ohio Valley Conference (OVC) tournament and other games this season,” Ochs said. “It’s just going to give us confidence that we can beat a team in five when it’s tight.”

Ochs was key for the Redhawks as she dished out 44 assists while also adding eight kills and eight digs to the stat sheet. Ochs attributes her high assist numbers to her team’s hitters.

“Obviously, I can’t get assists without my hitters, and I think they did a really good job today,” Ochs said.

Yankus said Ochs was a “baller” tonight and has been one all season.

“As a setter, her job is to put up the assists and run the offense,” Yankus said. “But tonight she found a way to score and contribute offensively. She also picked up things defensively that you think she’ll never get. She is doing an awesome job, and she leads the team on and off the court so well.”

Southeast was led by senior outside hitter Laney Malloy who had 19 kills and two service aces. Right behind her was sophomore outside hitter Zoey Beasley who had 15 kills while also adding in 9 digs.

The Redhawks now sit at 10-2 overall and 10-2 in the OVC. Southeast is back in action on March 21 when they travel to Charleston, Ill. to take on the Eastern Illinois Panthers at 6 p.m.