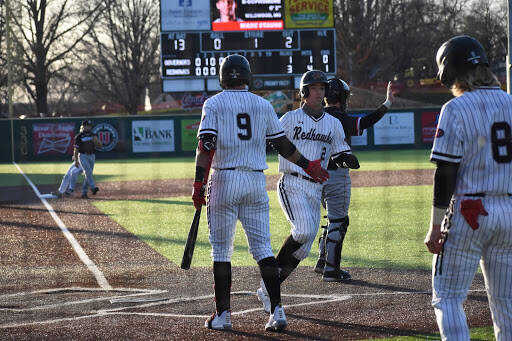 In a weekend slugfest, Southeast managed to come away with a two out of three against the Austin Peay Governors in a series that saw 43 runs combined.

Saturday, March 20, featured two tightly-contested double headers between the Redhawks and the Governors. Sophomore pitcher Noah Niznik found himself in trouble early following a walk and a fielder's choice. With two outs in the top of the first, he gave up a three-run home run to Governors’ redshirt junior utility man Ty DeLancy.

Niznik settled in following the three-run home run, finishing his day with seven innings, three runs and two strikeouts under his belt.

“He did a nice job of settling in and competing and was able to extend that outing for us and set us up in the second game,” Sawyers said.

The Redhawks got on the board in the bottom of the eighth inning following a solo home run from senior outfielder Danny Wright to cut the Governors’ lead to 3-1.

In the top of the ninth, the Governors struck back. DeLancy hit his second home run of the game to extend the Governors’ lead to 4-1. A walk, then an RBI double by Governors sophomore catcher Jack Alexander, pushed the score to 5-1 in favor of the Governors.

Senior shortstop Tyler Wilber led off the bottom of the ninth with a single followed by a single to center from sophomore catcher/outfielder Andrew Keck.

Senior infielder Austin Blazevic flew out to right field bringing freshman utility man Peyton Leeper to the plate. Leeper singled into center to load the bases for the Redhawks.

Sophomore outfielder Braxton Zivic drew a walk to shrink the Governors lead to 5-2. Sophomore outfielder Jevon Mason hit a sacrifice fly into right to bring the Redhawks within two runs. With two outs, senior second baseman Connor Basler then drove in both Leeper and Zivic with a single to tie the game at five a piece.

Sawyers said the leadership Basler brings to the team and the experience he has in the game of baseball is like having another coach.

“Connor’s a guy who's played a ton of baseball games. He started from the very beginning — he started opening day for us as a true freshman,” Sawyers said. “He's played a ton of baseball games, and he's got a lot of experience, and it's nice to have a guy on the field in the middle of the diamond playing that has so much experience and so many games played. He's like another coach on the field for us.”

The game stayed knotted at five until the bottom of the eleventh. Blazevic struck out swinging, followed by Leeper being hit by a pitch. Leeper advanced to second on a wild pitch, and Zivic walked for the second time in the game. Mason then singled to left, driving in Leeper to cap off the comeback and give the Redhawks a 6-5 victory.

Game two was started by freshman pitcher Kyle Miller. The Redhawks jumped out to an early lead, scoring two runs in the bottom of the second behind an RBI single from Mason and an error that allowed Zivic to score.

In the top of the sixth inning, Ty DeLancy hit his third home run of the afternoon to bring the Governors within two of the Redhawks. The Governors continued their scoring in the top of the seventh, scoring nine runs on nine hits. However, the Redhawks were able to get one back in the bottom of the seventh with a Wade Stauss home run. The Redhawks continued to claw and scratch their way back, scoring three runs in the bottom of the eighth.

Keck walked to lead off the bottom of the ninth, and Blazevic singled to right. Leeper then struck out, and freshman utility man Ty Stauss popped out, leaving the Redhawks with only one out to work with. Mason then walked, bringing Basler to the plate. Basler roped a ball into the right center field gap for a double, clearing the bases and tying the game at 11.

The Redhawks lost the finale in 12 innings by a final score of 12-11. After the weekend series, the Redhawks now sit at 10-8 and 4-2 in the Ohio Valley Conference.

The Redhawks are back in action Tuesday, March 23, against the Southern Illinois University Salukis at 5 p.m. at Capaha Park in Cape Girardeau.