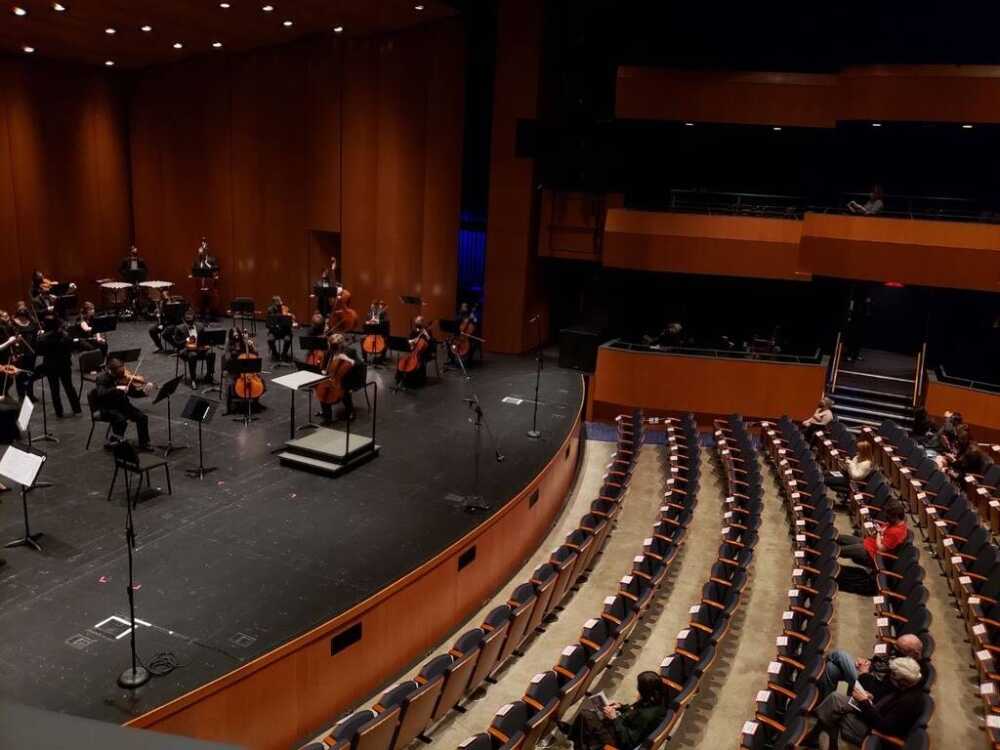 Balcony view of the Southeast Missouri Symphony Orchestra. Before the show started, performers tuned their instruments to get ready.
Photo by Josh Seabaugh

The Southeast Missouri Symphony Orchestra performed their spring concert “Mozart & More!” at the Bedell Concert Hall on March 9 and 10 at 7:30 p.m., where they played classical music by Beethoven, Franz Krommer and Mozart for the audience of Southeast students and southeast Missouri residents.

The Southeast Missouri Symphony rehearsed for months to prepare for the performance. Southeast junior Charles Hrdlicka played clarinet for the orchestra.

“We started [rehearsing] in January. Leading up to this point, we rehearsed twice a week for roughly two hours. We definitely put a lot of time into it,” Hrdlicka said.

Hrdlicka was also one of the featured performers. Along with fellow performer Ethan Brown, Hrdlicka had the spotlight on him, thanks to winning the Concerto-Aria Competition. Hrdlicka performed “Clarinet Concerto in E flat Major” by Franz Krommer.

Trudy Burnham, music education junior, attended the show on March 10. Like others, she knew about the feature performances, with both Hrdlicka on clarinet and Brown on marimba.

“I enjoyed the show. I had a lot of friends performing in it, so I came to watch them perform. I also knew there were the feature performers and really wanted to see them,” Burnham said.

Burnham also said she’s looking forward to the upcoming “Wind Symphony and Percussion Ensemble,” which will take place May 3 and 4 at Bedell Concert Hall.

The next show for the Southeast Missouri Symphony Orchestra is on April 26 and 27 at 7:30 p.m. at Bedell Concert Hall. The Symphony will play “The Lark Ascending.” The show will include a variety of colorful 20th- and 21st-Century works and feature Sophia Han on violin. For Southeast students, ticket prices are only three dollars with a student ID.