The art of democracy 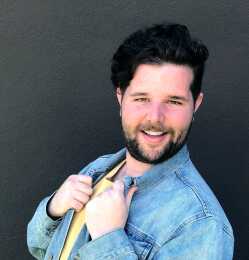 Politics are a taboo topic to many people, however alumnus Zack Tucker wants to change this with his art. Tucker’s gallery gives his viewers the chance to see politics in a different light and be engaged in his interactive art gallery on River Campus.

Tucker attended SEMO from 2008 to 2012 and graduated with a BFA in graphic design and illustration. Art history professor Joni Hand asked him to exhibit a gallery at SEMO for the juror’s showcase.

Tucker is an assistant professor of communication design in the Department of Art at Miami University in Ohio. He is a designer, researcher and educator, and explores the intersection of design strategy, politics and autonomous technologies.

“I’m a designer, so I work a lot with digital technology and tools to create things,” Tucker said. “I would say I am transmedia, so I use things to articulate what the concept may be. I might move in and out of different styles of working depending on the needs of the client.”

The interactive show is titled “Dialogues on Democracy.”

Justin Henry Miller, gallery coordinator for the Department of Art and Design, said Tucker’s show is really about creating a conversation about politics and how to access it.

Tucker said one of his favorite pieces from the show was a video at the beginning of the exhibit which was presented when a viewer entered the room. The video introduces the concept of the show and includes a voiceover of Tucker on a Ronald Reagan political ad.

“I think that that one is the most emotionally engaging; the rest are pretty informational,” Tucker said.

The gallery consists of three activity stations for students and viewers to interact with, along with a couple of videos that can be watched.

“The whole goal is to get people to openly share their thoughts and views, while also inserting themselves into the piece a little bit,” Miller said.

The notes viewers write down in the activities stay with the project. The notes are taped to the wall and become a part of the artwork. When the gallery comes down Miller will be sending back the notes and information to Tucker to continue their incarnations of this project.

The gallery is open to the public from 1 to 4 p.m. Monday through Friday until Wednesday, March 31, in the Seminary Building, room 106.