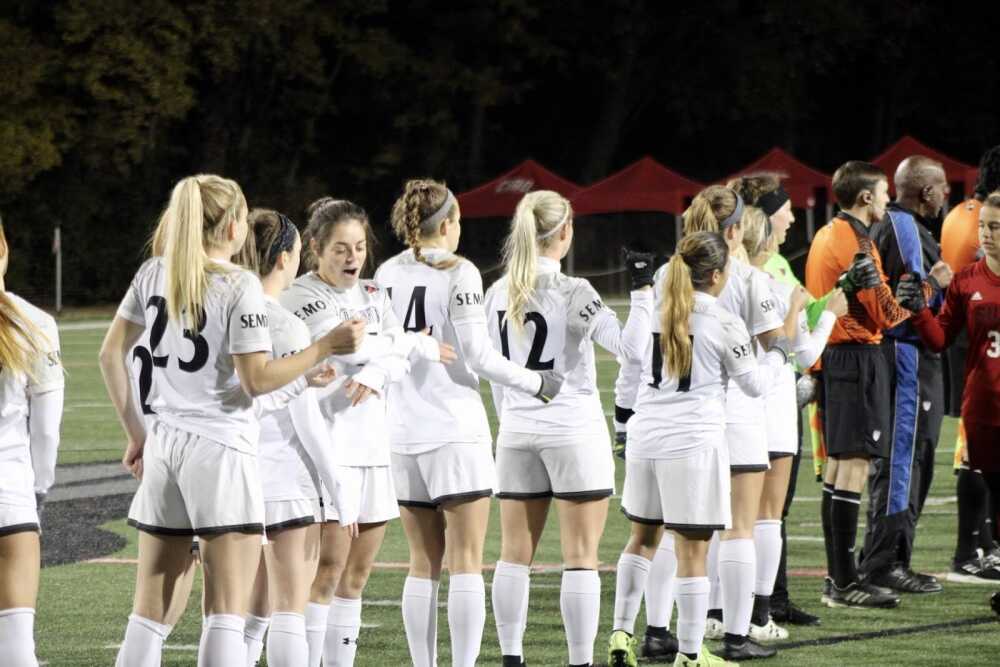 The Redhawks fist bump with the SIUE Cougars following the Redhawks 2-1 loss in the OVC Tournament on Nov. 8, 2019.
Photo by Jelani Days

In their final home match of the season on Friday, April 2, the Southeast soccer team was defeated by Murray State by a score of 3-1. This game decided the Ohio Valley Conference regular-season champion as the teams were ranked one and two, respectively.

The Redhawks struck first with a goal in the 11th minute from junior midfielder Lauren Welker. A hand ball in the box by the Racers gave Welker a penalty kick that she was able to convert off the rebound. Welker said the team came out strong and aggressive which allowed them to get the scoring opportunity. Welker also said that a penalty kick is a little bit different than just a regular shot.

“It’s definitely a lot of pressure, but I know that my team has my back,” Welker said. “They’re confident I can get it in the goal, so knowing they had my back was the difference.”

After the goal by Southeast, the defense of Murray State did not allow another shot on goal the rest of the match. The Racers went on to score three unanswered goals. The first came in the 26th minute and was scored by senior forward Rebecca Kubin off the assist from freshman midfielder Hailey Cole. The game was tied 1-1 at the half.

After the half, the Racers came out and scored quickly, in the forty-ninth minute sophomore forward Lilly Strader scored off the assist from freshman defender Camille Barber. Redhawks head coach Heather Nelson said that her team responded well after Murray State’s second goal.

“I think we just kept gaining and gaining momentum,” Nelson said. “We were pushing, so it was unfortunate that we didn’t get an equalizer for it.”

The final goal for Murray State came in the last two minutes of the match when Strader scored again.

The Redhawks final match of the season is on Tuesday, April 6 when they take on the University of Tennessee at Martin Skyhawks. A win and an SIUE loss will give SEMO second place in the OVC.