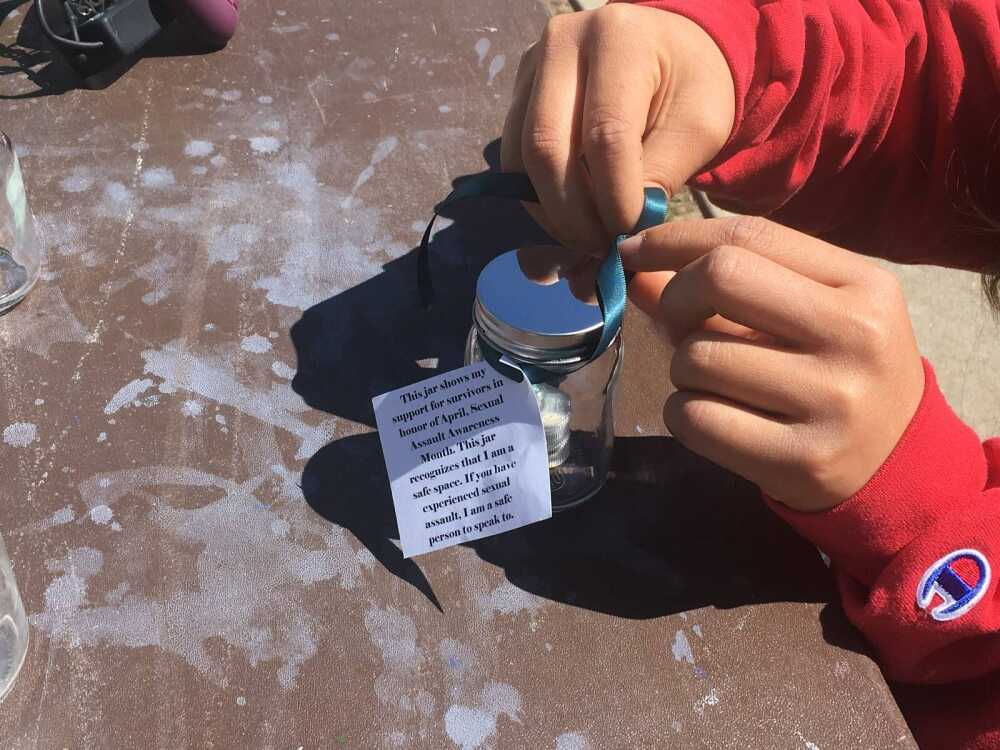 A Southeast student makes a safety jar at the booth for Sexual Assault Awareness Month. Similar to the lid, nearby trees were wrapped with teal ribbons.
Photo by Josh Seabaugh

April 1 marks the beginning of Sexual Assault Awareness Month (SAAW). To raise awareness in support of victims, the Campus Violence Prevention Program has planned four events throughout the month. The opening event was an informational booth. It took place on April 1, between 11 a.m. and 1 p.m. outside of the University Center.

At the event, volunteers gave out flyers, shirts and pins related to SAAW. The highlight of the small setup were small crafts called safety jars, which consist of a teal light inside of a small glass jar. The safety jars were finished with a teal ribbon wrapped around the lid. Donna St. Sauver, coordinator of the Campus Violence Prevention Program, organized the event and said the jars are meant to be symbols of safety to victims of sexual assault.

“That is something new to our campus,” St. Sauver said. “Basically, you can put it outside your door or outside your window, and it signifies that you’re a safe person for someone who’s experienced violence to come to for help and support.”

Similar to pink ribbons and shirts for breast cancer awareness, those at the booth wore teal shirts for Sexual Assault Awareness Month. Teal ribbons were wrapped around trees and posts near the booth.

Senior Alana Fischer made a safety jar at the booth. Fischer said sexual assault is something that needs more attention.

“Sexual assault awareness is very important to me,” Fischer said. “I’ve had friends who have suffered from situations that they were unable to get out of. It’s definitely something that needs to be brought to attention, especially in the college scene.”

The Campus Violence Prevention Program is in collaboration with the National Sexual Violence Resource Center, promoting the Instagram contest “#30DaysOfSAAM.” A daily theme will help raise awareness for sexual violence and allow survivors to connect with one another. Rules for the contest can be found on the NSVRC website.

The Campus Violence Prevention Program has four main events planned throughout April. St. Sauver said she is most excited for “SEMO Rising!” on April 22. At this event held at the Academic Terraces at 7 p.m., students will gather to create a supportive environment. Those who have experienced sexual violence are invited to express themselves through word, song and dance during an open mic.