Pysanky: Use an ancient tradition to spruce up your Easter eggs this year 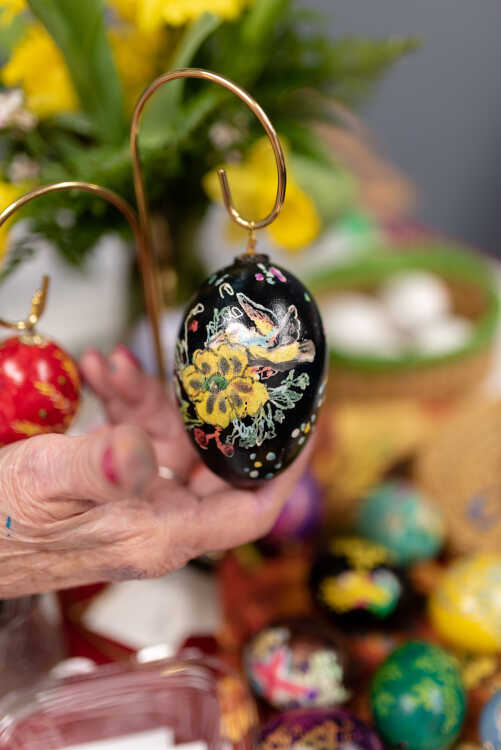 It was a d’obriy dyen (good day) on March 24 at the Crisp Museum when Barb Duncan taught pysanky, a Ukrainian egg decorating class, titled “Creating an Amazing Painting on a Very Small Canvas, an Egg.”

Duncan, who taught Integration of the Arts into all disciplines at SEMO for 17 years, has been creating decorated eggs since 1993. Duncan said pysanky is the process of decorating hollow egg shells with 100% beeswax and dye while using ancient Ukrainian art symbols.

“Every color has a meaning, and every object has a meaning,” Duncan said. “You draw on your egg. You color the pictures, and then you save the colors you want with beeswax.”

The beeswax application tool, a kistka, is a color-resistant process. The tool acts as a wax writing instrument, and the beeswax preserves the hues underneath it. The flame of a candle melts the beeswax, and then it can be applied to the egg. This step has to be repeated every few minutes because the wax hardens. The dye should be applied lightest to darkest.

The second-to-last step is melting the beeswax off the egg by holding it to the side of a candle and wiping it with a paper towel. Holding it above the candle will cause soot marks, Duncan said. The last step is the application of polyurethane, which creates a shiny coat. Then, the decorated eggs will last forever.

The class began with a powerpoint explaining the process of pysanky, which is an ancient art form. Attendees learned some phrases in the Ukrainian language and then started decorating their eggs. Duncan offered the class homemade Paska bread with a berry spread while they worked. Duncan said the eggs are meant to be given to someone to bring them good fortune.

Community member and participant Alobie Sautter said this is a class she has wanted to take for several years. This was her first time attending, but she said the events that happen at the Crisp Museum are the community’s “best-kept secret.” Sautter said creating a pysanka wasn’t a difficult process, and the class was relaxing.

“I looked for symbols of joy and awakening, which I think we can all look forward to this year. We all need it,” Sautter said. “There were things I would have done differently next time, but that’s the experience.”

Ellen Flentge, Crisp Museum’s curator of education, also participated in the Ukrainian egg decoration event. Flentge said she has been collaborating with Duncan for more years than she can remember. In those years, many people have attended the annual class.

“It’s a multicultural learning tradition through artistic style,” Flentge said. “We have local people that travel worldwide and come back and share what they have learned.”

To learn more about pysanky egg decorating, visit Youtube for tutorials. Supplies such as the kistka, beeswax and dyes can be purchased on Amazon. Any type of egg will work, and it’s optional to hollow it out or not.

This class ran March 23-24. The Crisp Museum is hosting its “Annual Juried Student Exhibition” April 9 through May 9. This exhibition showcases the talents of the Department of Art and Design students. Viewing the exhibition is free and open to the public.