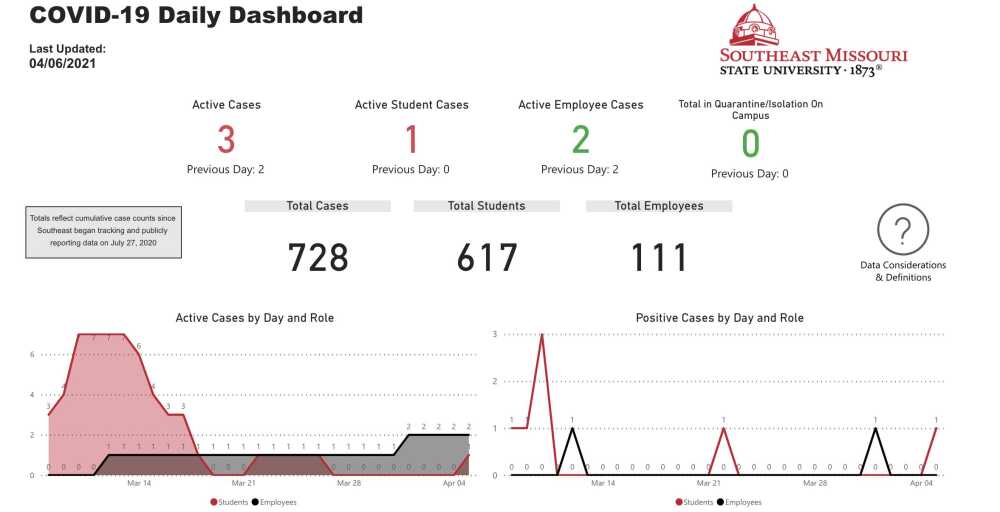 Standing for nearly 60 years, Dearmont residence hall has outlived many historic events and is being actively utilized during another historical occurrence: the COVID-19 pandemic.

For more than 200 students since August, this aging residence hall has been home — at least temporarily. As part of the Protect the Nest plan, Dearmont was established as quarantine housing for on-campus students. As of April 4, zero students are quarantined on campus.

Housing director Clint Ashner directs the transition from students’ dorms to quarantine housing. In an experience he calls “fast-paced,” he said he’s learned to adapt to the challenges.

“It’s been different from anything I’ve ever done,” the graduate student said. “It’s very different from other hall director positions, since they get to see their students all year. I’m really only the students' hall director for a two-week period, if that, when they come through.”

As he reflects on his role in the past year, Ashner said he’s been fortunate recently to not have to house any quarantined students.

The process includes close communication with students as they transition to temporary housing.

After students are identified through contact tracing, Ashner facilitates the move to Dearmont. He said he gathers information, coordinates with DPS and the dean of students, delivers room keys, provides directions and keeps communication with students. He works mainly through email to keep the process as smooth as possible.

Students confirmed as COVID-19 positive are placed in the building’s B and C wings, Ashner said, while those with suspected cases of COVID-19 are placed separately in the D wing. Students are given up to a day to move into transitional housing.

“I email them basically an orientation email, and it gives them a detailed list of what to expect while they’re here,” Ashner said.

Each room has its own mini-fridge, air conditioning unit and microwave.

“Not every room was ready, and we didn’t want to put people in rooms that didn’t have AC,” he said. “We got really full for a second.”

During the time, Ashner said he recalls several athletic groups being quarantined together, which accounts for most of the some 200 total quarantined students.

In addition to facilitating more tangible facets of the transition, Ashner also ensures the mental and emotional wellbeing of students. While responses vary from quarantinee to quarantinee, he said it’s often a stressful time.

“Some students handle it really well, but some get really stressed and worried about missing class,” he said. “After their first or second day, they get used to it. They realize it’s a scary situation, but it will be okay.”

Ashner said he tries to stay in close contact via email with students who are especially stressed and refers students to counseling services on campus. Part of Ashner’s job during the fall semester was delivering weekly care packages for every student, which were donated by employees at Kent Library.

“Every department across campus did something for this building,” he said.

Beyond quarantined students, the building also houses a teaching kitchen, actively utilized by hospitality management students. The interior entrance door is locked to prevent exposure to COVID-19-positive students; individuals can enter the kitchen and dining area through the courtyard entrance.

Going forward, Ashner said he hopes the building continues to remain vacant. In the past one and a half semesters, he said it’s given him an unforgettable experience.

“I think this position gave me a lot of opportunity to work in other departments,” Ashner said. “While I still want to be a hall director for a while longer, I can see myself doing other things because I’ve interacted with every department across this campus.”