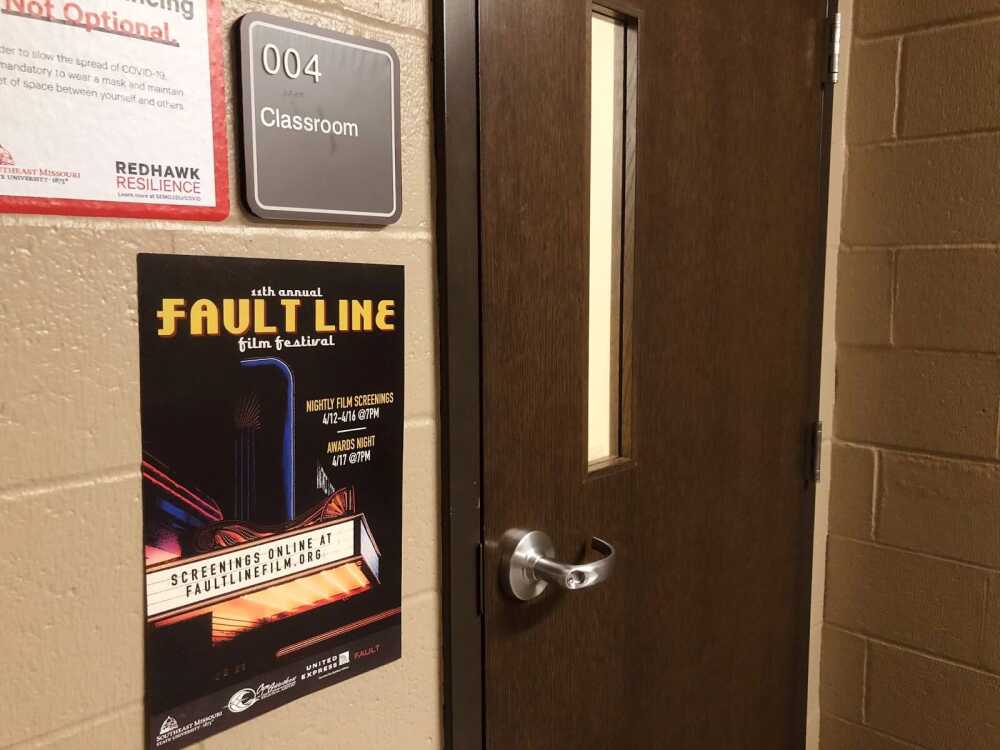 At Southeast, classroom 004 in Grauel holds meetings for the club, Riverfront PR. In this space, students bring new ideas to life to help build campaigns for their clients. Their campaign this year is focused on the client Fault Line Film Festival. The group meets weekly on Wednesdays at 12:30 p.m.
Photo by Hannah Radden

What if there was a way for students to expand their portfolio by joining a group that gives them real-life job experience while still attending school and managing other activities?

RiverFront PR is creating these opportunities for students.

Riverfront PR is a group that enables students to experience what it would be like to work in a public relations agency, how to work with real clients, and how to understand the process of their field.

Sarah Cavanah, assistant professor of mass media and faculty advisor for Riverfront PR, has worked with students in the organization for three years. As a faculty advisor, she helps provide structure, guidance and advice to students.

Cavanah said the group was founded during the mid-2000s by a group of students because they wanted to get an understanding of agency work and clients.

There are currently five students who major in public relations involved with the group, but Cavanah said the group is not limited to only PR majors. In years past, TV and film students have been involved.

When discussing the layout of the group’s meetings, Cavanah said the agency director of the group leads the way for the current agenda with their client work.

Previous clients the group has worked with in Cape Girardeau include Trio, PORCH and United Way.

One positive addition to working with the group is that they also help the students find internships outside of Riverfront PR.

“So, Riverfront kind of is for getting started, and then a lot of times we get people into internships where they get exposed to even more of that professional world,” Cavanah said.

Southeast public relations junior Ian Figurski joined his sophomore year and finds the group to be beneficial to his understanding of PR.

“I wanted to get some hands-on learning because I was a new PR major and so young, I thought it would benefit me in the future,” Figurski said. “I have always liked the work that we have done. We do a lot of social media management and promotion, which is one of the biggest things in the industry at the moment. We have also done event planning and campaign work.”

Fred Jones, professor of mass media at Southeast, is the supervisor of Fault Line. The festival has been running for 11 years, and submissions include university and high school film students.

The recruitment for the festival is mainly in the Midwest, but Jones said they have reached farther out.

“We’re trying to keep it kind of contained in the Midwest,” Jones said. “So, we go kind of as far south as Arkansas. We go all the way up to North Dakota and then maybe as far as Michigan.”

The film festival involves approximately 50 students, which can include more depending on the number of students assisting on the films together. The film categories include comedy, drama, mystery/suspense, long form, animation, alternative and a high school category.

Their partnership with Riverfront PR began when Cavanah approached Jones, mentioning the group could do a lot for their social media presence. This collaboration would work because it was a “student film festival, and we are a student agency,” Cavanah said.

For this project, many of Riverfront PR’s social media tactics are focused on the idea for “the love of film.” To keep people active on the page, some of their tactics include a March Madness bracket for genres and voting, Movie Scene Monday and movie quotes/trivia.

Jones said they have seen a huge difference from the group's campaign development.

“Really, Riverfront transformed our festival in that way,” Jones said. “We had no social media presence. The outreach is much better, and the right audiences are being targeted.”

With the impact of the virus, the festival has been moved to online using Youtube and some Zoom for the master classes.

“Usually, we'll have a big gala that people get dressed up for and a red carpet, so that's a lot of fun,” Jones said. “So that's kind of the thing we missed the most, just all the social activities that go along with the festival.”

The difficulties of the virus have also had an impact on Riverfront PR.

“It’s hard to get students interested,” Cavanah said. “People feel like their bandwidth is run down. They feel overwhelmed because you're just dealing with all this new stuff all the time; learning how to do classes differently and just don't have as much energy.”

However, Cavanah said with the committed group they have this year, the organization is hopeful to expand when things get back to normal.

The group meets weekly for their meetings. To get in contact with the group about more information or about Fault Line, stop in at one of their meetings on Wednesdays at 12:30 p.m. in Grauel Room 004.