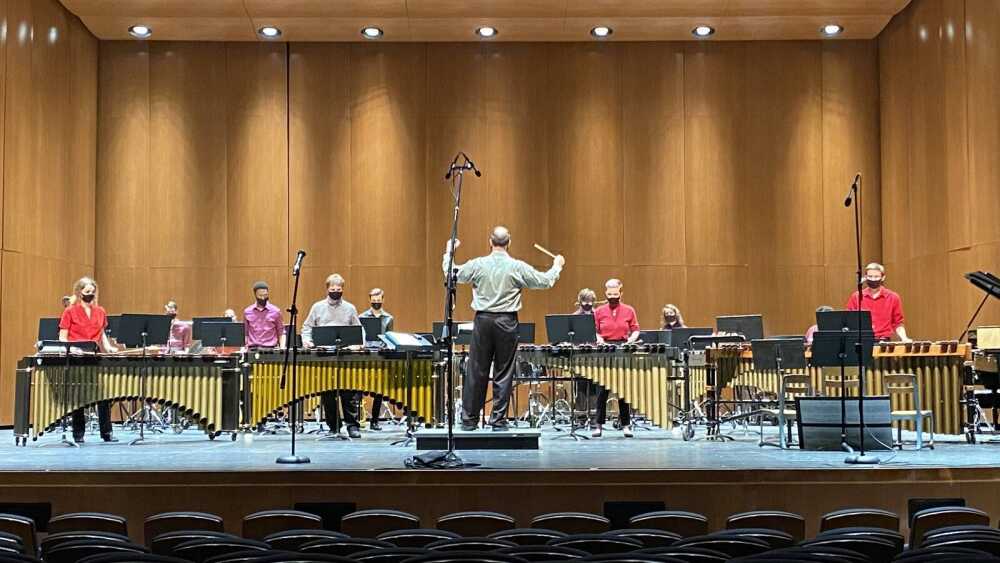 Boom, clap, the sound rumbled through Bedell Performance Hall as the Southeast Percussion Ensemble performed a variety of rhythmic pieces for their spring concert on March 23.

According to the Southeast calendar, this concert promised to let the audience experience percussive energy from a new perspective in an intimate venue. Director Shane Mizicko originally intended for the performance to take place at the Rust Flexible Theatre, a more intimate venue than Bedell Performance Hall.

Despite the change in venue, the audience witnessed a showcase of unique musical talent, from pieces with different styles and rhythmic challenges, to a mix of trios and other smaller ensembles. Junior Gloria Bennett, who had a xylophone solo in the piece “Danza Furioso,” and sophomore Ethan Brown, who displayed his talent on the piano in the final selection, both agreed the song “Stubernic'' was the most popular. In this piece, the trio all played on one marimba together, rotating around each other at certain points and playing some sections of the song on the parts of the instrument not typically used for musical expression such as the stand and frame, which hold the instrument together.

“I like that one just because it’s very involved with every single part — it’s not just featuring the second player who is known as the soloist,” Brown said. “It showcases everyone’s ability.”

“I work with the directors every now and then; my son is actually in the percussion section at the high school right now,” Mizicko said.

The high school students not only showcased their talents in the song “Stormbreak," but also performed the piece “Perpetuo” with a trendy instrument: boomwhackers. Boomwhackers are color-coded, tuned percussion tubes primarily used to complement the music they produce. Mizicko chose this piece knowing the students would love it.

Other performances included “Intentions, Mvt II — Proposal,” a trio featuring Angel Evans, Ethan Brown and Gloria Bennett on tambourines, and “Momentum,” which utilizes non-traditional percussion instruments including a brake drum, created using repurposed car parts. For those who enjoy the film and book series “The Lord of the Rings,” the Percussion Techniques class, composed of music education majors who do not typically play percussion instruments, performed “Drums of Moria,” a piece influenced by the fantasy series. Mizicko said the performance was their midterm exam; they had been studying the piece for eight weeks.

Junior Cleo Watkins and senior Hollynn St. Clair, who attended the concert to support musician CJ Hart, demonstrated their love for the percussionists with whistling, clapping, yelling and a standing ovation. St. Clair said it’s hard to have a community feel at a socially-distanced event.

Watkins said performers feed off of energy, and if the audience is small and “dead,” it is difficult to perform. St. Clair and Watkins said the performers were deserving of their energetic praise.

“The percussion concerts are one of the most underrated concerts here at SEMO,” Watkins said. “I think that their studio works incredibly hard to put on this extra concert every semester.”

Mizicko said he wants people from the main campus, especially, to attend and enjoy future shows.

“You get here, and once people see what it is — it’s not a band concert, it’s not an orchestra or choir concert, it’s something completely different — it appeals to the general public usually. It’s pretty popular music for most of it, some of it is kind of out there,” Mizicko said. “I think once you come and see what it is, you’ll wanna come back and check it out.”